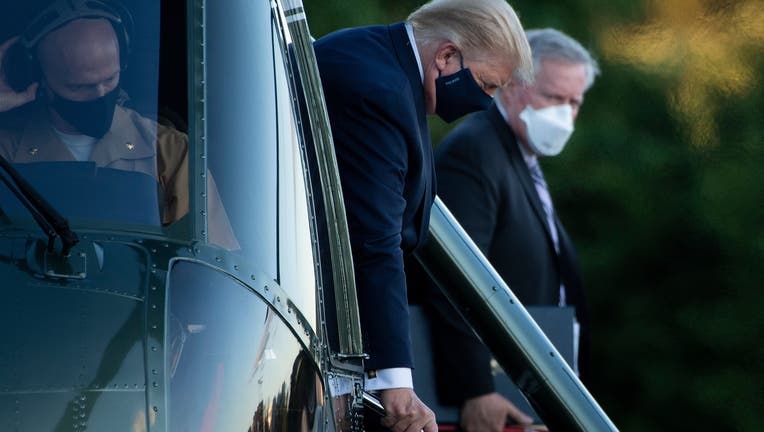 White House Chief of Staff Mark Meadows watches as US President Donald Trump walks off Marine One while arriving at Walter Reed Medical Center in Bethesda, Maryland on October 2, 2020.  ((Photo by BRENDAN SMIALOWSKI/AFP via Getty Images))

BETHESDA, Maryland - President Donald Trump says he's "feeling well" and has voiced his appreciation for the medical professionals treating him for COVID-19 at a military hospital.

On Saturday, Trump tweeted, "Doctors, Nurses and ALL at the GREAT Walter Reed Medical Center, and others from likewise incredible institutions who have joined them, are AMAZING!!!"

He also says, "With their help, I am feeling well!"

It comes as White House chief of staff Mark Meadows said Trump went through a "very concerning" period Friday and the next 48 hours will be critical in terms of his care.

TRUMP GIVEN SUPPLEMENTAL OXYGEN AFTER BEING DIAGNOSED WITH COVID

Stricken by COVID-19, a feverish and fatigued President Donald Trump was flown to a military hospital Friday night after being injected with an experimental drug combination in treatment at the White House.