HONOLULU - A powerful magnitude 8.1 earthquake struck Thursday in the ocean off New Zealand, prompting thousands of people to evacuate and triggering tsunami warnings across the South Pacific.

A magnitude 8.1 earthquake, occurred at 8:28 a.m. NZST Friday, or at 2:28 p.m. ET Thursday, according to the U.S. Geological Survey. The epicenter was about 600 miles northeast of the North Island, but the USGS said the quake "was strongly felt across much of New Zealand." 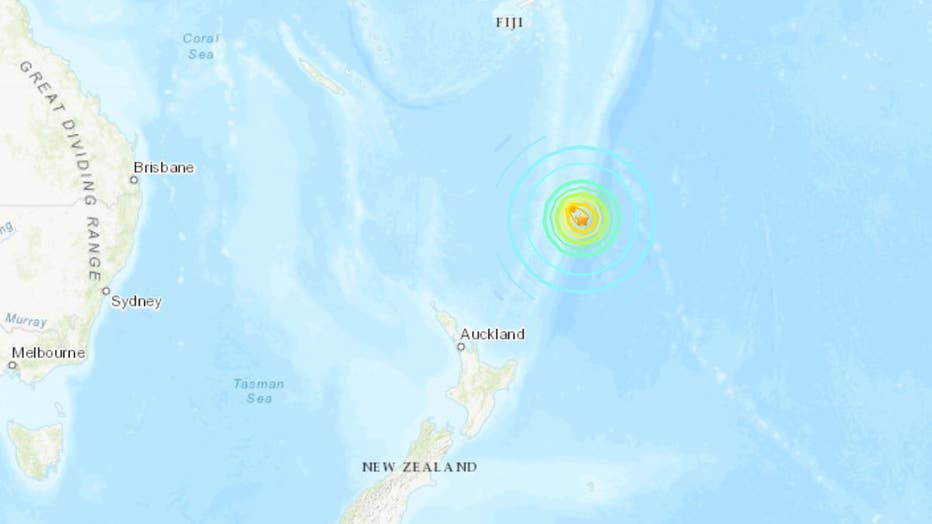 The event prompted mass evacuations and tsunami warnings across the South Pacific.

Footage posted on Facebook showed hundreds of children being evacuated from a school on the main island of American Samoa.

The U.S. Pacific Tsunami Warning Center canceled a tsunami watch Thursday for Hawaii that was issued after the huge earthquake The quake forced thousands of people to evacuate in New Zealand, but did not appear to pose a widespread threat to lives or major infrastructure.

Officials said the 8.1-magnitude quake was "directly related" to an earlier magnitude 7.4 earthquake in the same location two hours prior.

"Both of those occurred on the subduction interface between Pacific and Australia plates," the USGS wrote on Twitter.

A tsunami warning was issued for large stretches of New Zealand’s northeast coastline on March 5 after a magnitude-8.1 earthquake struck the Kermadec Islands. Credit - Ray Williams via Storyful

A tsunami warning was issued for New Zealand coasts, the country's emergency management agency said on Twitter. Videos showed residents scrambling to higher ground as tsunami warning sirens blared on the coast of the island nation.

The earthquake was widely felt in New Zealand, and residents in the major cities of Auckland, Wellington and Christchurch reported being shaken awake.

In 2011, a magnitude 6.3 quake hit the city of Christchurch, killing 185 people and destroying much of its downtown.

This story was reported from Cincinnati and Los Angeles. The Associated Press contributed to this story.