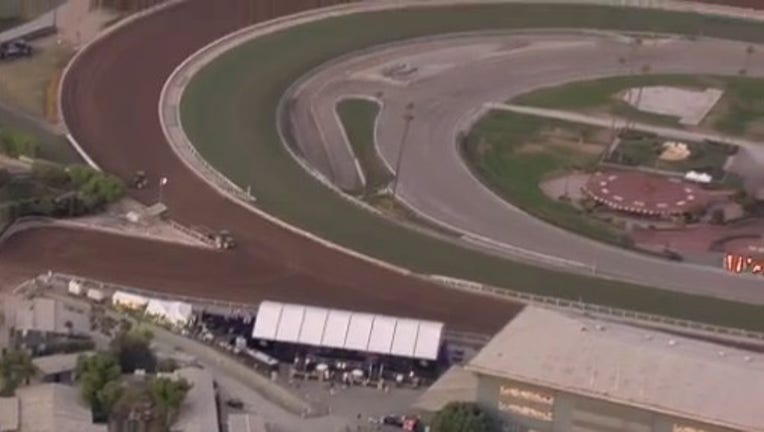 ARCADIA, Calif. - Another racehorse died today after breaking an ankle at Santa Anita Park, one day after a 5-year-old gelding was euthanized after
fracturing his right front ankle at the Arcadia track.

Saturday's death of Uncontainable is at least the 41st horse death at Santa Anita since December 2018.

The 4-year-old gelding was entered in Saturday's first race, but did not finish. An incident alert posted on Santa Anita's web site said the horse suffered a "Fractured right front ankle. Per recommendation from the attending veterinarian, the horse was humanely euthanized.''

On Friday, Harliss, who finished seventh in a field of eight in the seventh race, "was unsaddled nearing the clubhouse turn and vanned off,'' according to Santa Anita racing information. He was euthanized under the recommendation of the attending veterinarian.

Harliss was third both a quarter-mile and three-eighths of a mile in the 5 1/2-furlong race on Santa Anita's turf course, then dropped to fourth entering the stretch. He was coming off the lone victory in his 12-race career, finishing first in a 5 1/2-furlong race on Los Alamitos Race Course on Dec. 6. Harliss was trained by Val Brinkerhoff. His career earnings were $23,026.

A necropsy will be performed as required by the California Horse Racing Board.

Uncontainable's death was the third among the 705 horses who have raced at Santa Anita's winter/spring meeting, which began Dec. 28. The 4-year-old gelding Golden Birthday sustained a hind pastern fracture with sesamoid involvement in a mile-and-and-eighth race on the turf course New Year's Day and was euthanized upon the recommendation of veterinarians.

Truest Reward, a 3-year-old gelding, fractured his left shoulder on the training track at Santa Anita the morning of Dec. 26, two days before the start of the winter meet. The training track was closed to workouts but open for jogging and galloping.