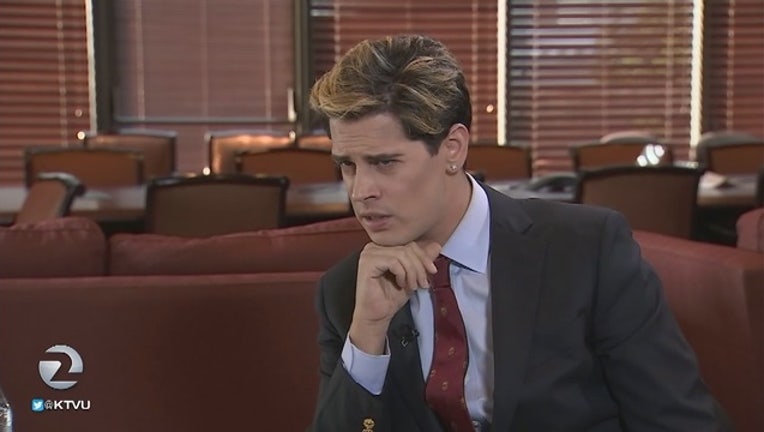 BERKELEY, Calif. (KTVU/BCN) - And in a letter to Interim Vice Chancellor Stephen Sutton announcing the cancelation, the Berkeley Patriot's attorney, Marguerite Melo, wrote "the student group has been subjected to extraordinary pressure and resistance, if not outright hostility, by the UC Berkeley administration."

The original cancelation statement issued by Berkeley's administration said external parties made claims that the university wanted to place the speakers in harm’s way. But the university was preparing for considerable campus life disruption and was in the process of spending a sum in excess of one million dollars to beef up security and make the event safe.

“We want to state unequivocally that campus leaderships has complete faith in the UCPD, as well as the extraordinary number of allied law enforcement agencies who agreed to contribute additional officers for these events, Dan Mogulof, Assistant Vice Chancellor, wrote in a press release.

On Friday, conservative commentator Ann Coulter withdrew from speaking at the four-day event and cited that she never had a contract. Coulter said she had no desire to give the university a second chance.

“I’m not sure the rest of the Berkeley campus deserves to hear from the likes of my educational edifice and entertaining speeches,” Coulter said in a phone call with KTVU.

Following her announcement, Chanel Korby, a spokeswoman for Yiannopoulos, reported that the event would still take place despite media reports that it had been canceled.

Yiannopoulos addressed the public through Facebook live at 11:45 Saturday morning. He apologized to those who traveled from out of town and said UC Berkeley is to blame for the mishap. He claims he will work to reimburse any lost traveling funds.

Additionally, he plans to still speak tomorrow in Sproul Plaza at 12 p.m. with or without help from students or the university. As directed by his lawyer, he and others will be gathering to speak on campus "in their capacity as private citizens."

The university notes the “disproportionate amount of time” campus staff spent planning the event over the past eight weeks. Preliminary reservations for a number of indoor and outdoor venues were made by the student organization, but the deadlines to complete and confirm the contracts were not met. Additionally, Milo Inc. issued names of speakers that were never confirmed by the student organization.

Just last week, UC Berkeley shelled out $600,000 when conservative Ben Shapiro spoke on campus event put on by the Berkeley College Republicans. Though the event did have some hiccups, including nine arrests, it was largely peaceful and Mogulof called it “a successful event.”

Mogulof said yesterday in an email that he was aware of the rumors that the student organization had cancelled the events scheduled for next week.

But Mogulof said, "The campus has not heard directly from the students and must, for the time being, proceed with plans to provide for the safety and security of the campus community and any speakers who may still be planning to come to Berkeley."

The university is dedicated to sending the message that they are committed to freedom of speech and that will continue to constructively work with campus organizations to host speakers on campus. Moguloff addressed the media Saturday afternoon with Margo Bennett, Chief of Police for UCPD: