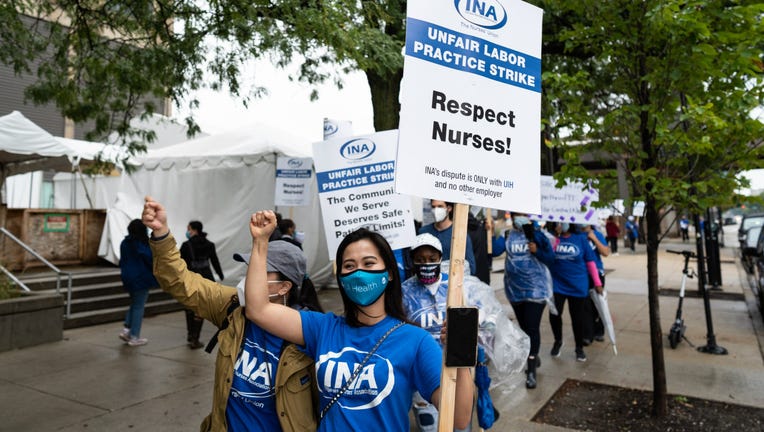 Nurses at the University of Illinois Hospital (UIH) rally on the first day of their strike in Chicago, IL on September 12, 2020. Hundreds of UIH nurses are demanding safe patient limits and adequate personal protective equipment. (Max Herman/NurPhoto via Getty Images)

CHICAGO - Union nurses at the University of Illinois Hospital have reached a tentative agreement on a new four-year contract, they announced Thursday.

The contract includes a promise to hire 160 more nurses to cut down on patient loads, promises of more protective gear, hazard pay for working during the coronavirus pandemic and other guarantees, the Illinois Nurses Association said in a statement.

The move follows a weeklong strike by 800 nurses that ended Saturday morning when they went back to work without an agreement, the Chicago Sun-Times reported.

The agreement still needs the approval of a majority of the approximately 1,400 union nurses in a vote Monday.

“We are gratified to achieve this hard-fought victory after months of negotiations,” Illinois Nurses Association President Doris Carroll said in a statement. “The nurses were unified and strong and it paid off in what we think is a fair contract.”

University of Illinois Hospital officials did not immediately comment on the reported deal.

Several hundred nurses were barred from striking after a Cook County judge granted the hospital’s request to keep them on the job for the care of patients.

About 3,700 other hospital employees represented by the Service Employees International Union Local 73 remain on strike. They began their strike more than a week ago, calling for better pay and more coronavirus protection.