Officials in Virginia say a police officer accused of using excessive force during a traffic stop of a Black Army officer has been fired hours after the state's governor called for an independent investigation into the incident.

WINDSOR, Va. - Officials in Virginia say a police officer accused of using excessive force during a traffic stop of a Black Army officer has been fired hours after the state's governor called for an independent investigation into the incident.

In a statement, the town of Windsor said it joined calls from elected officials, including Gov. Ralph Northam, in requesting an investigation by Virginia State Police into the December 2020 encounter.

During the incident, two Windsor officers were accused of drawing their guns, pointing them at U.S. Army second lieutenant Caron Nazario and using a term to suggest he was facing execution. Nazario, who is Black and Latino and who was in uniform, was also pepper-sprayed and knocked to the ground by the officers, Joe Gutierrez and Daniel Crocker, according to the lawsuit he filed earlier this month against them. Much of the incidence was captured on police body cameras. 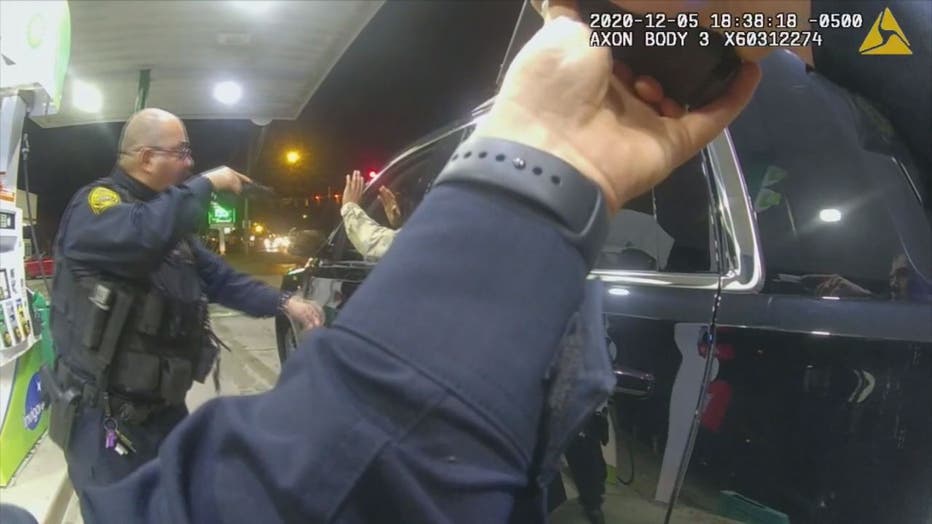 The two sides in the case dispute what happened, but Crocker wrote in a report that he believed Nazario was "eluding police" and he considered it a "high-risk traffic stop." Attorney Jonathan Arthur told The Associated Press that Nazario wasn't trying to elude the officer, but was trying to stop in a well-lit area.

Windsor officials said an internal investigation opened at the time into the use of force determined that department policy wasn't followed, according to a statement released Sunday. Officials said disciplinary action was taken and Gutierrez has since been fired. Officials added that departmentwide requirements for additional training were also implemented beginning in January.

In a tweet Sunday Northam called the December 2020 encounter "disturbing" and said that he directed State Police to review what happened.

"The incident in Windsor is disturbing and angered me – and I am directing the Virginia State Police to conduct an independent investigation. Our Commonwealth has done important work on police reform, but we must keep working to ensure Virginians are safe during interactions with police, the enforcement of laws is fair and equitable, and people are held accountable.

I am inviting Army medic Lieutenant Caron Nazario to meet soon – we must all continue the larger dialogue about reform in out country."

FULL STATEMENT FROM TOWN OF WINDSOR:

"The Town of Windsor, Virginia, acknowledges the unfortunate events that transpired on December 5, 2020 involving Lt. Caron Nazario and officers of the Windsor Police Department, Joe Gutierrez and Daniel Crocker. The pursuit and ultimate stop resulted in the use of pepper spray against Lt. Nazario byOfficer Gutierrez. As a result of this use of force, Department policy requires an internal investigation to determine the appropriateness of such actions. The investigation of thisevent began immediately. At the conclusion of this investigation, it was determined that Windsor Police Department policy was not followed. This resulted in disciplinary action, and department-wide requirements for additional training were implemented beginning in January and continue up to the present. Since that time, Officer Gutierrez was also terminated from his employment.

The Town of Windsor has remained transparent about this event since the initial stop, and has openly provided documents and related video to attorneys for Lt. Nazario. The Town will continue to provide information related to this event in its commitment to openness. The Town has also requested an investigation of this event by the Virginia State Police, and joins with elected officials who have called for a full and complete review of the actions of these officers.

The Town of Windsor prides itself in its small-town charm and the community-wide respect of its Police Department. Due to this, we are saddened for events like this to cast our community in a negative light. Rather than deflect criticism, we have addressed these matters with our personnel administratively, we are reaching out to community stakeholders to engage in dialogue, and commit ourselves to additional discussions in the future."

"Lieutenant Nazario is gratified by the outpouring of support this weekend for the civil rights lawsuit he filed last week. He is encouraged that his story resonates with so many who are willing to speak out.

In particular, we welcome Governor Ralph Northam’s directive for a criminal investigation of this incident. We appreciate also appreciate the attention of Attorney General Mark Herring, and Senator Tim Kaine.

The Town of Windsor disclosed last night that Officer Gutierrez has been terminated his employment. While this is appropriate, we must consider steps to decertify officers that engage in this behavior, so that they cannot seek employment with other law enforcement agencies. Additionally, the law enforcement community has consider seriously the failure of officers like Daniel Crocker to promptly intervene to end an unjust police-civilian encounter as it unfolds. Too often, officers will support their colleagues, right or wrong, at the cost of innocent citizens.
Jonathan Arthur and the other attorneys of Thomas H. Roberts & Associates, P.C. continue to work with Lieutenant Nazario as this case unfolds. Press inquiries can be directed to their office."