An Arizona man's dashcam caught startling video of him nearly being hit by a wrong-way driver, and he says this isn't the first time something like this has happened with this driver.

SAN TAN VALLEY, Ariz. - An Arizona man's dashcam caught startling video of him nearly being hit by a wrong-way driver, and he says this isn't the first time something like this has happened.

John Furman says he was driving in San Tan Valley on Hunt Highway near Gantzel Road Saturday morning when he was nearly hit by a wrong-way driver before reacting just in time.

"Always watch the road! Sometimes you only have a split second to react," Furman said on his YouTube video description.

He added, "He ran several people off the road. The really scary thing is that others in the area report the same truck doing the same thing on other days too. This idiot will kill someone someday."

Furman says he contacted the Pinal County Sheriff's Office and they have not provided a comment on Saturday's incident or the other reported incidents Furman says happened.

"I'm grateful nothing bad happened because I got to come home to my kids, and that almost wound up being different," Furman said.

His hope is this story can serve as a warning to others to keep their eyes on the road because moments like this can happen in a matter of seconds.

"I hope that the sheriff's office catches up with the guy and gets them off the road because this seems to be a chronic issue and that's really, what I want, I don't want somebody to get hurt, and if those kinds of these kinds of things keep happening, it's only a matter of time," he said.

He added, "It's something people need to be aware of when they drive because it took less than two seconds from the time I first saw that truck until it would have hit me if I didn't move and had I've been looking down at my phone, while I was driving or doing anything else, it would have ended in a different way." 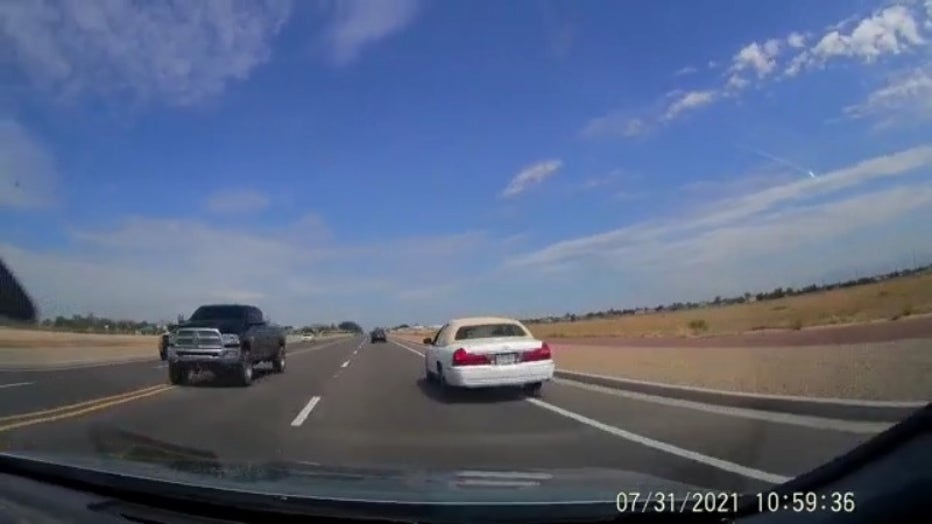 The truck on the left is a reported wrong-way driver caught by John Furman's dashcam on July 31, 2021