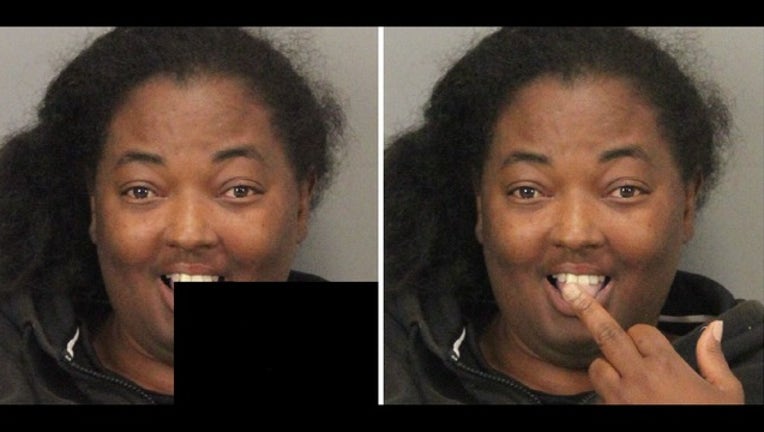 Tyechia Payton, 34, was arrested Wednesday after leading Palo Alto police on a chase and allegedly punching an officer and a police canine. She had been wanted on a felony warrant for assault with a deadly weapon. Photo: Palo Alto Police Department

OAKLAND, Calif. (KTVU) - A wanted woman led a Palo Alto police vehicle on a chase and then punched an officer and a police dog during the early hours of Wednesday morning, police said.

And then her defiance continued when she flipped off the camera in her booking photo. Police posted the photo, and a description of the arrest, to Facebook with the “obscene gesture” covered in black.

An officer ran a routine registration check on a blue 2013 Hyundai Sonota in Palo Alto on Wednesday around 1:23 a.m. and discovered there was an outstanding felony warrant associated with the vehicle, police said. The warrant was for assault with a deadly weapon.

The officer pulled over the vehicle occupied by Tyechia Payton, 34, of Thorton, who was in fact the woman who had the outstanding warrant. She followed the officer’s commands initially and then drove away the vehicle stop scene, heading westbound on Stanford Avenue. The pursuit continued into the Palo Alto foothills before reaching a dead end in the 3200 block of Alexis Drive.

Police said Payton exited her vehicle and “began punching an officer” before a second officer deployed their Taser. Payton was eventually subdued by a police canine, but not before also punching the dog.

Payton was booked into the Santa Clara County Main Jail for felony evading, assault on a police officer and assault on a police dog – both felonies – and misdemeanor resisting arrest. She was also booked on two warrants out of the Fremont Police Department. One was the felony warrant for which she was originally stopped for and the other was a misdemeanor traffic warrant.