WARREN, Mich. - Video from the sides of houses in a Warren neighborhood showed a man dressed in a white sweatshirt and sweatpants, armed with a handgun, stalking around a home. Eventually, a muzzle flash can be seen from when he fires the gun.

It's the third incident since Monday that a Black family has been targeted by alleged hate crimes and the second time he fired a weapon at their home.

Warren Police have begun an investigation into the attacks, which have become a nightmare for Eddie and Candace Hall.

"They're victims of hate crimes and intimidation which we're not going to tolerate," Warren Police Commissioner Bill Dwyer said during a press conference.

Footage from different cameras on homes showing a man believed to be targeting a Black family in Warren, shooting at their home late Thursday night.

On Monday, a man took aim at the Hall family's home and fired multiple shots, hitting their truck.

On Wednesday, the couple were further alarmed after someone threw a brick through the front window of their home, scribbled obscenities on their truck, and slashed its tires.

The day after FOX 2 reported on the racist vandalism, which included a swastika, the family found themselves under fire a third night when around 11:32 p.m. on Thursday, a man with his face concealed was spotted on multiple surveillance cameras stalking between homes.

The video shows him four several minutes in between two houses and appears to be waiting. Around 11:36 p.m., he walks into the yard of one of the homes before creeping around a car parked in the driveway.

At 11:37 on a different surveillance camera, the man can be seen running away from the home and the flash from a muzzle can be seen twice - indicating the man fired a gun toward the home.

"Within 10 seconds, you're going to see a muzzle flash here and a muzzle flash back here," said an officer pointing to where in the yard the man fired. 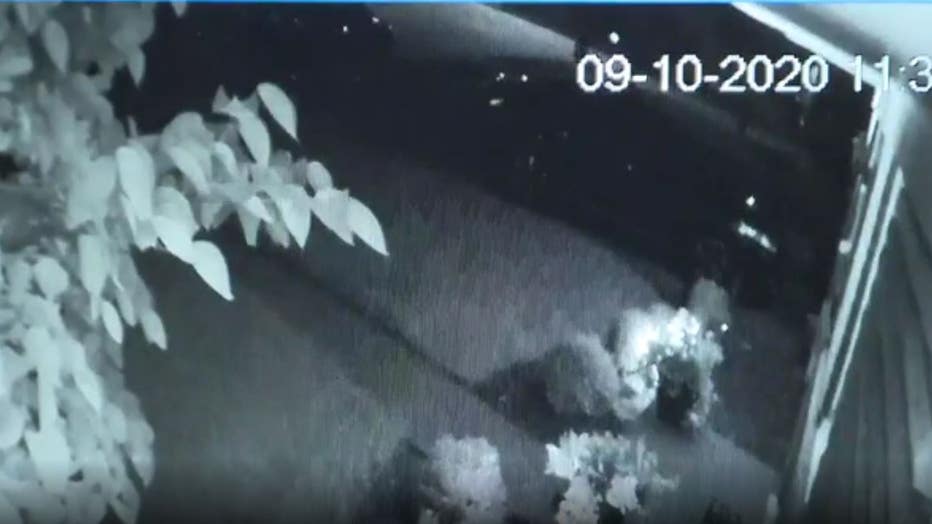 The Warren Police Department hoped the release of the footage would aid them in their search for the suspect. They've also included a $3,000 reward leading to his arrest.

The family says they're not the only Black family that lives in the neighborhood but are the only ones who have a Black Lives Matter sign. Following Wednesday's attack, they believed the expressed support for the movement is what led to the incidents.

Warren police shared surveillance video of a man wanted for a hate crime, after they say he threw rocks through a Black family's window, slashed their tires and even shot into their home.