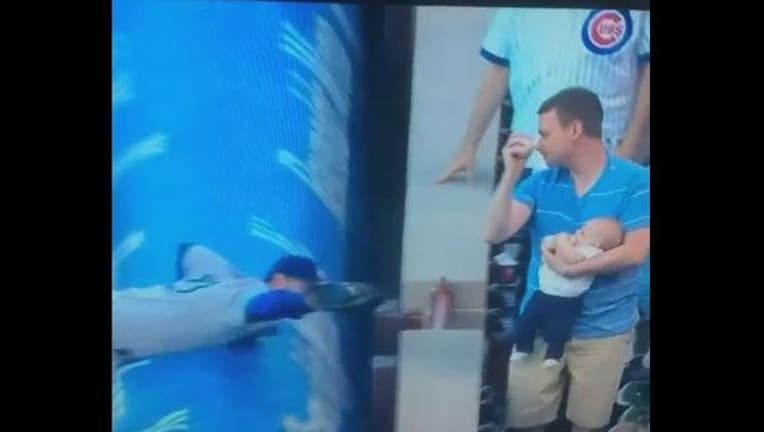 The best play during Tuesday night's Chicago Cubs game at Wrigley Field wasn't even made by a player.

A multi-tasking Cubs fan stole the show and proved it is possible to feed a baby and snag a foul ball. Keith Hartley, 29, caught a foul ball with one hand and his baby son and a bottle in the other hand!

With two out and none on in the second inning at Wrigley Field, Cubs right-hander Jason Hammel fouled off a pitch from Zack Greinke. Gonzalez chased the popup and reached over the rolled-up tarp while trying to make a play, but Hartley reached out and grabbed the ball with his right hand while carrying a baby sucking on a bottle in his left arm.

Dodgers manager Don Mattingly then came out of the dugout and argued for fan interference. While the play was being reviewed, the crowd roared as the sequence was shown again on ballpark's videoboards.

After a short delay, the call was reversed and Hammel was ruled out, ending the inning.

The AP contributed to this story.