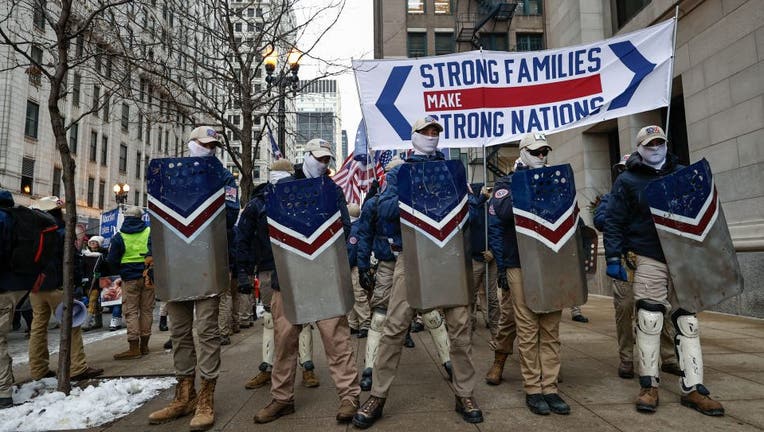 The white nationalist group Patriot Front attends the March For Life on January 8, 2022 in Chicago, Illinois. Rally and march were a part of three-day annual public event.  (Photo by Kamil Krzaczynski/Getty Images)

CHICAGO - Dozens of members of the white supremacist group Patriot Front marched alongside anti-abortion activists Saturday afternoon in the Loop.

Video footage from the event shows March for Life members heckling the far-right group as they attempted to join their rally.

Thomas Rousseau, the group’s figurehead, was seen leading the front of the group in a cowboy hat and no face covering.  Rousseau previously led another extremist group, Vanguard America, at the disastrous "Unite the Right" rally in Charlottesville, Virginia, in 2017.

"What are you carrying shields for? This is a peaceful demonstration. You guys are an embarrassment," a man with March for Life yelled at the Patriot Front members in one video posted to Twitter.

Patriot Front members did not respond to hecklers in the video and eventually stopped marching alongside the anti-abortion activists who ended their demonstration in front of the Hilton Hotel.

In a blog post, the Anti-Defamation League defines the Patriot Front as a white supremacist group who "espouses racism, anti-Semitism and intolerance under the guise of preserving the ‘ethnic and cultural origins’ of their European ancestors."

Patriot Front is one of the most active white supremacist groups in the U.S. in recent years, and often "takes advantage," of events like the March for Life rally, according to David Goldenberg of the ADL.

They sometimes show up and pretend to be participants, other times they try to commandeer the event, "really taking advantage of things that are already put together…to make it appear there are more who support their racist, anti-Semitic, hateful views," Goldenberg said.

Patriot Front often takes aim at events where there may be some "overlapping views," and use them as recruitment opportunities.

Patriot Front hasn’t written about joining the march on its website or on the encrypted messaging app Telegram, where the group typically touts its public demonstrations.

Patriot Front didn’t immediately respond to questions from the Sun-Times.

As the anti-abortion activists concluded their rally Saturday, Patriot Front continued to march through Grant Park and crossed the tunnel to the other side of the street, where they were picked up by a fleet of cars with covered license plates.

Patriot Front held their own little-publicized rally in the Loop nearly a year ago, which also coincided with a March for Life Chicago demonstration.

Since 2017, members of the group have attended three pro-life rallies in Chicago and demonstrated in the city a total of ten times, according to the Anti-Defamation League.

In 2018, members of the group were thrown out of a pro-life rally in the city after displaying a banner that read "PROTECT OUR POSTERITY" and referenced the phrase "blood and soil," according to a blog post on the Pro-Life Action League’s website. "Blood and soil" is a Nazi slogan that was chanted by demonstrators in Charlottesville.

"We applaud those people who rejected them," Goldenberg said. "It’s important for communities to reject this type of hate and to do it vocally."