The periodical is predicting “cold and snowy conditions in the north, drought in the west, and everything crazy in between.”

LEWISTON, Maine - Winter is coming — and it will be one of “great divide” because of its unusual outlook for the 2020-2021 season, according to an extended winter weather forecast released this week by the Farmers’ Almanac.

The periodical is predicting “cold and snowy conditions in the north, drought in the west, and everything crazy in between.” This includes forecast of a blizzard, bringing 1-2 feet of snow along the eastern seaboard during the second week of February.

“Based on our time-tested weather formula, the forecast for the upcoming winter looks a lot different from last year, quite divided with some very intense cold snaps and snowfall,” editor Peter Geiger said in a statement.

The Farmers’ Almanac forewarns areas from the Great Lakes and Midwest, westward through the Northern and Central Plains and Rockies will face a cold winter, with normal to below-normal temperatures.

It also predicts “abundant” snow, with possibly above-normal amounts for parts of the western Dakotas, northern portions of Colorado and Utah, as well as Wyoming. 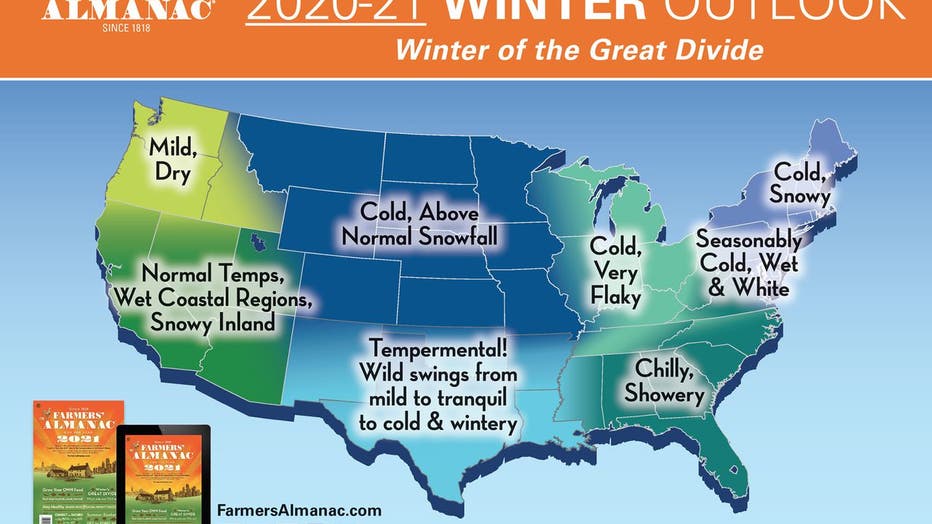 The Farmers’ Almanac says the 2020-2021 winter season has an “unusual outlook” with cold and snowy conditions for some, drought in the West and “everything crazy in between.” (Photo credit: Farmers’ Almanac)

The southeastern part of the country — excluding the Tennessee Valley — is expected to have average precipitation levels with temperatures chillier than normal.

Winter is predicted to be mild but dry for desert areas in Arizona and Southern California, which the periodical says is “not good news” considering signs of increased drought conditions in these regions at the close of the winter of 2020.

For areas like New Mexico, Texas, Oklahoma east into Arkansas and Louisiana, “Mother Nature will mix intervals of tranquil weather with occasional shots of cold and wintry precipitation," the Farmers’ Almanac says.

Rainy and wet weather will dominate the winter months for residents along the Pacific Coastal Plain, from northern California and points north through western portions of Oregon and Washington.

Tennessee and lower Ohio River valleys, north and east up through New England have been dubbed the “winter wild card.” The Almanac suggests these regions will see a mix of “intense weather systems that will keep delivering a wintry mix of rainy, icy and/or snowy weather throughout the season.”

The Farmers’ Almanac, which has been predicting the weather for more than 200 years, last year predicted a “Polar Coaster Winter” with freezing temperatures and snowfall in most of the country. While the winter temperatures ended up being more mild, some of their predictions were correct.