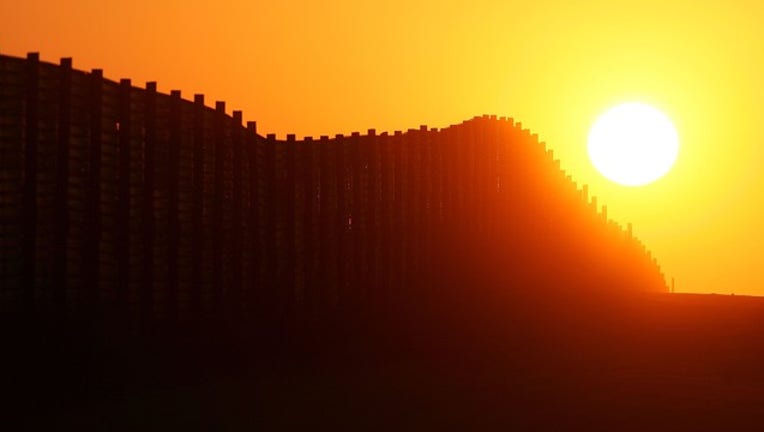 The sun sets behind a section of the US-Mexico border fence which activists opposing illegal immigration hope will be turned into a fully-lit double-fenced barrier between the US (R) and Mexico. (Photo by David McNew/Getty Images)

MISSION, Texas (AP) - Four people, including three children, found dead in South Texas near the border with Mexico most likely died of dehydration and heat exposure after crossing the Rio Grande into the U.S., authorities said Monday.

A law enforcement official close to the investigation told The Associated Press the four were overcome by the heat and foul play is not suspected. The official spoke on condition of anonymity because the person isn't authorized to speak publicly about the bodies found Sunday.

Hidalgo County sheriff's Sgt. Frank Medrano said earlier that the bodies of a woman in her early 20s, a toddler and two infants were found in or near Anzalduas Park, which borders the river in the city of Mission.

Authorities believe they may have been dead for days before being discovered. The FBI is leading the investigation into the deaths because the park is on federal land.

"It's an incredibly heart-breaking situation," the agency said in a statement Monday.

The names of the four have not been released and authorities are working to determine their country of origin.

Medrano said the area is commonly used by migrants entering the country illegally.

"It's a well-known route because it's so close to the border," he said.

Constable Larry Gallardo told The Monitor newspaper in McAllen that the terrain can be difficult to traverse.

"There's a lot of brush," he said. "It's like ranchland, there's no difference."

The Rio Grande Valley sector of the Border Patrol, which includes the area where the four bodies were found Sunday, has experienced an unprecedented number of apprehensions involving people entering the country illegally.

Over a seven-month period ending in April, Border Patrol agents had apprehended more than 164,000 people, a number surpassing the total number of apprehensions in all of fiscal year 2018.