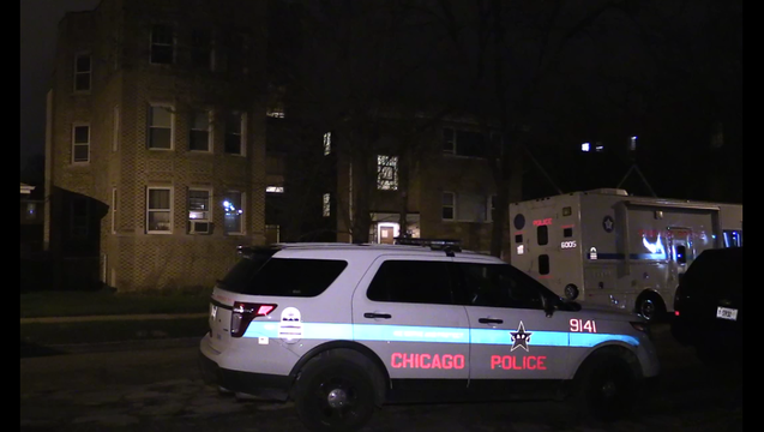 Chicago Police investigate in the 1700 block of East 85th Place, where a 35-year-old woman was found shot to death Tuesday. | Network Video Productions

CHICAGO (Sun-Times Media Wire) - A 35-year-old woman was killed and at least six other people were wounded in separate shootings Tuesday across Chicago, police said.

The woman was found shot to death about 7:35 p.m. in her Avalon Park neighborhood apartment after what may have been a domestic incident on the South Side.

Officers responding to a call for a well-being check at an apartment in the 1700 block of East 85th Place found 35-year-old Babette Miller unresponsive with multiple gunshot wounds, according to Chicago Police and the Cook County medical examiner’s office.

A family member called police when they hadn’t heard from the woman, according to a police source.

Miller, who lived in the apartment, was pronounced dead at the scene at 7:58 p.m., authorities said.

As of Wednesday morning, no one has been taken into custody in connection with the shooting, but it may have been domestic-related, police said. Area South detectives are investigating.

Most recently, a 22-year-old man was shot in the North Side Rogers Park neighborhood. He was standing outside of a store about 8:20 p.m. in the 7300 block of North Damen when someone with a gun approached and shot him in the buttocks and back, police said. The man was taken to Presence Saint Francis Hospital in Evanston, where his condition was stabilized.

Shortly after 5 p.m., a 22-year-old man was shot in the Auburn Gresham neighborhood on the South Side. He was walking in the 8100 block of South Loomis when he was shot in the lower right side of his abdomen, police said. The man took himself to Little Company of Mary Hospital and Health Care Centers in Evergreen Park and was transferred to Stroger Hospital, where he was listed in good condition.

A 33-year-old man was shot about 3:40 p.m. in the South Shore neighborhood. He was in a vehicle in the 7400 block of South East End when someone shot through the passenger side window, police said. The man suffered a gunshot wound to the upper left thigh and took himself to Jackson Park Hospital and Medical Center. He was transferred to Stroger Hospital, where his condition was stabilized.

Less than an hour earlier, a woman was injured in a Brighton Park neighborhood drive-by shooting on the Southwest Side. The 37-year-old was walking just before 3 p.m. when a male in a passing vehicle traveling north in the 4300 block of South Talman fired shots, police said. She suffered a gunshot wound to the abdomen and was taken to Mount Sinai Hospital, where her condition was stabilized. A police source said the shooting was possibly gang-related.

About 1:35 p.m., a 19-year-old man was shot in Englewood on the South Side. He was sitting in a vehicle about 1:35 p.m. in the 600 block of West 62nd Street when shots rang out and he was struck in the leg, police said. The man took himself to St. Bernard Hospital, where his condition was stabilized.

Tuesday’s first shooting happened at 2:44 a.m. in the Back of the Yards neighborhood on the South Side. A 45-year-old man was sitting in a vehicle in the 4600 block of South Paulina when a male walked up and opened fire, police said. The man was shot in the left leg and was taken to Mount Sinai Hospital, where he was listed in good condition.