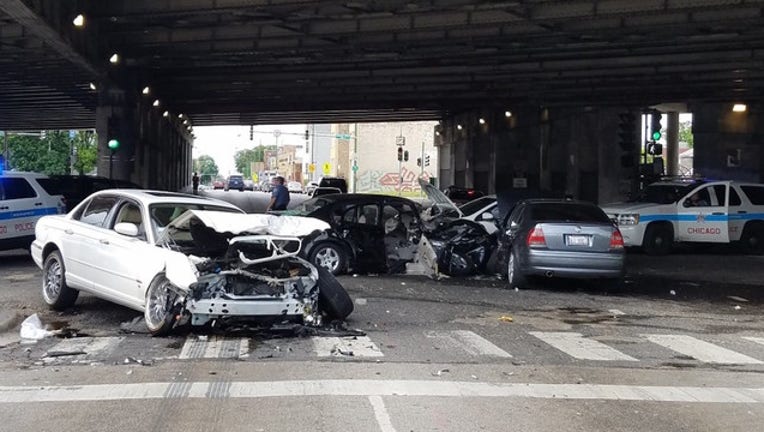 A woman was killed in a four-car crash that also left her husband in critical condition Sunday morning in the Avondale neighborhood on the Northwest Side. | Ashlee Rezin/Sun-Times

CHICAGO (Sun-Times Media Wire) - Detectives were questioning a person of interest Sunday night in connection with the Avondale hit-and-run crash that left a woman dead and her husband seriously injured on the Northwest Side.

About 7 a.m. Sunday, a white Jaguar with Illinois license plates of “DO R DI” was westbound on Belmont Avenue when it ran a red light at the intersection of Kedzie Avenue, according to Chicago Police.

The Jaguar hit the passenger side of a Chevrolet that was northbound on Kedzie, sending it spinning into two other cars in oncoming traffic, police said.

The passenger in the Chevrolet, 62-year-old Carmen Maria Vanegas, was taken to Advocate Illinois Masonic Medical Center where she died at 7:39 a.m., according to police and the Cook County medical examiner’s office. Vanegas lived in the 3900 block of West 58th Place.

The 64-year-old man at the wheel of the Chevrolet was taken to the same hospital in serious condition. A police source said he was the woman’s husband.

The driver of the Jaguar ran away after the crash, police said. Investigators think alcohol was a factor.

Police said a person of interest was being questioned Sunday night. No charges have been filed.