The bizarre incident was captured on video July 21 at a Fred Meyer grocery store in Washington state.

LONGVIEW, Wash. - A maskless woman at a grocery store in Washington state was captured on video ordering others away from an aisle until she was done shopping, calling one person a “demon” while invoking the name of Jesus Christ.

The incident happened July 21 at a Fred Meyer grocery store in Longview, Washington, located about 50 miles north of Portland. Tara Lee Holcomb recorded the video, in which the woman can be heard berating a worker and other shoppers.

RELATED: Going shopping? Here are the major retailers that are requiring customers to wear masks

“I command you in Jesus Christ’s name to get off this aisle,” the woman yells, while pacing up and down the vitamin aisle. “I’m buying something! Have respect.”

“She doesn’t want anyone to go down that aisle until she can get what she wants and leave the aisle. So she’s rebuking everyone that enters the aisle,” a bystander can be heard commenting in the video.

At one point, the woman comes face to face with a shopper and calls them a “demon.” She continues to cast everyone away until she can “buy something.”

“And then I will happily leave,” the woman exclaims. 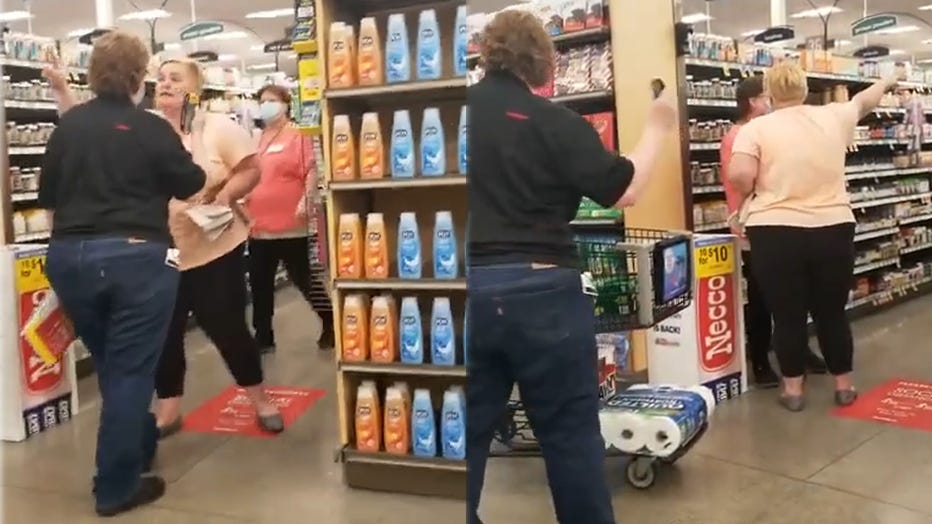 Screengrabs of a video captured by Tara Lee Holcomb shows the woman without a face mask on July 21, 2020 at a Fred Meyer grocery store in Washington state. (Photo credit: Tara Lee Holcomb via Storyful)

Washington state ordered businesses to require and enforce the use of face coverings by all customers and clients amid the coronavirus pandemic, which went into effect on July 7. The mandate applies to indoor public spaces such as stores, offices and restaurants, as well as for outdoor public settings when 6 feet of distance cannot be maintained.

Holcomb shared a follow-up video on Twitter, which appeared to show the woman being held down by someone at the front of the store. She can be heard crying out and yelling, “Let go of me.”

In the second video, a bystander can be heard commenting: "She can say whatever she wants, but she was getting in elderly ladies' faces and stuff and that's not cool. They were on the aisle, and she was screaming in their faces and chasing them off."

Fred Meyer did not immediately respond to a request for comment.

RELATED: Woman who refused to wear mask in Starbucks wants half of $100K raised for barista who wouldn’t serve her