Texas Governor Greg Abbot held a news conference on Feb. 21 to speak about the state's efforts to recover from winter storms that left millions without power.

LEANDER, Texas - An H-E-B grocery store in Leander, Texas allowed hundreds of customers to walk out the front doors with carts full of groceries for free after the store’s power went out.

A Facebook post shared by local resident Tim Hennessy garnered nationwide attention after he praised the Texas grocery store chain for its generosity during a difficult time.

According to Hennessy, who published the post on Feb. 16, he and his wife, Deb, decided to venture out to get groceries "before the next snowstorm and historically, crazy weather" hit Austin, Texas, which is just south of Leander.

As they shopped inside their local H-E-B, the power went out.

RELATED: How to help Texans in need following winter storm, where to donate

"When that happened, you could hear a collective groan throughout the store," Hennessy said with a chuckle."It was still light out as it was only about 3:30 p.m. We kept shopping as hundreds of other people were too," Hennessy continued.

As Hennessy and his wife hurried to get the items they needed, they heard an employee ask for all customers to head to the checkout lines. 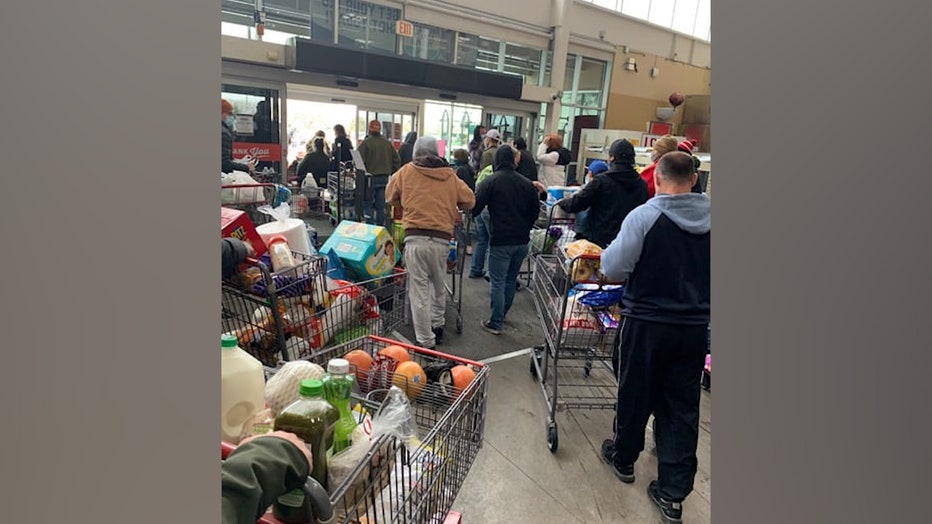 "We got to a line with about 10 full carts in front of us and there were many other lines to both sides of us and many people behind us. There were between 100-200 people ready to be checked out," Hennessy said. "And we both thought, this is going to take hours."

The first 15-20 minutes went by slowly, but all of a sudden, the lines were moving much more quickly."We both thought, wow they’re moving pretty fast," Hennessy continued.

When it was finally the couple’s turn to check out, the cashier asked if the pair had any alcohol, to which Hennessy responded, "No, but if you are giving out drinks, I could use one about now."

RELATED: Why was Texas without power? How a winter storm pushed the state into crisis

The cashier then directed Hennessey and his wife out of the store, saying, "Please go ahead but we can’t bag anything up for you."

The couple were confused at first and asked how they were to pay for their groceries. The cashier said, "Just go ahead and be safe driving home."

Hennessy and his wife quickly realized what was going on — the store was giving away groceries for free."My wife began tearing up which always gets me teared up too. It was just the sheer gesture and generosity and their kindness," Hennessy said.

RELATED: Why some Texans are getting sky-high energy bills after winter storm

"From the bottom of mine and Deb’s heart, we will never forget what you did when no one would have blamed you for taking a different action and when no one expected such a wonderful gesture," Hennessy wrote in his Facebook post.

Hennessy said that there were half a dozen H-E-B employees lined up near the entrances saying goodbye to customers.

"You could tell everyone was genuinely touched. You saw people in the parking lot helping each other out, getting groceries into their cars and the feeling was like, we wanted to share the generosity and pay it forward," Hennessy said.

Hennessy said that after his post went viral, he feared he might have gotten management in trouble, so he reached out to corporate, who assured him that no wrongdoing had taken place.

RELATED: Water departments warning North Texans to not flush anti-freeze down the toilet

"It’s been a tough week in Texas and just a tough year, but here’s a story where they didn’t ask us how much money we have or what our status was, it doesn’t matter who we were, you’re our customers, go home and be safe," Hennessy said.

FOX TV Stations reached out to H-E-B for comment, but has not yet received a response.

Texas was hit by one of the worst snowstorms in the state’s history last week, causing rolling blackouts, some of which have lasted for days.

Texans were forced to rely on relief efforts for food and water while also navigating around price gougers for necessities.

At the height of last week's storm, hospitals scrambled to care for patients amid record cold temperatures, snow and ice that battered parts of the country more accustomed to going through winter with light jackets and short sleeves.

The icy blast ruptured water mains, knocked out power to millions of utility customers and contributed to at least 76 deaths — half of which occurred in Texas. At least seven people died in Tennessee and four in Portland, Oregon.