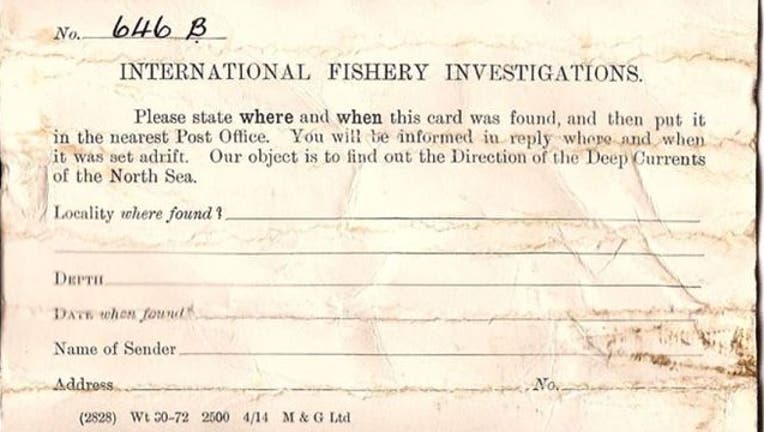 This photo made available by the Scottish Government, shows the message in a bottle discovered by fisherman Andrew Leaper, which set a new world record for the length of time spent at sea, beating the previous record by more than five years. (AP)

LONDON (AP) — A century-old message in a bottle, possibly the oldest ever found, has finally reached its destination.

Tossed into the North Sea sometime between 1904 and 1906, the bottle washed up on the beach on the German island of Amrum, and was found by a couple in April. Inside they found a postcard asking that it be sent to the Marine Biological Association of the U.K. — which they did.

"We were very excited," Guy Baker, a spokesman for the group, said Friday. "We certainly weren't expecting to receive any more of the postcards."

Baker said the bottle was one of some 1,000 released into the North Sea by researcher George Parker Bidder, who later became the association's president. The bottles were weighed down to float just above the sea bed, and used as part of a study into the movement of sea currents.

Inside each bottle was a postcard promising a "one shilling reward" to anyone who returned it to the association, along with information about where and when they found the bottle. Most bottles were trawled up by fishermen and returned decades ago, Baker said.

The association is now looking into having the Guinness Book of Records recognize the message in a bottle as the oldest ever found. The current record-holder, released in 1914 for a scientific experiment, was found 99 years later.

Meanwhile, an old shilling has been sent to the couple who found the bottle.