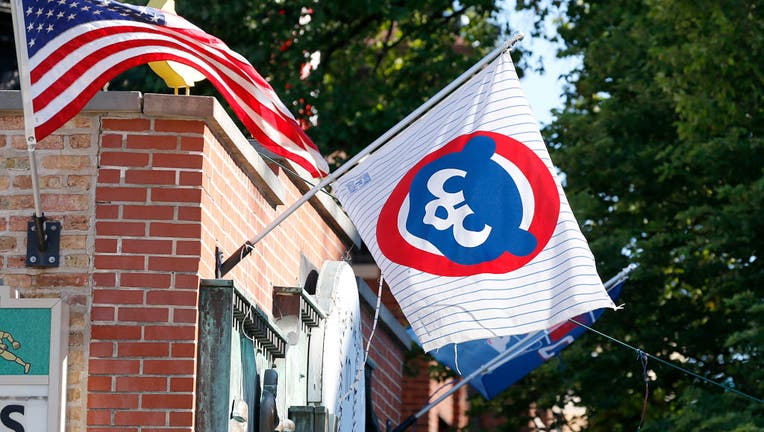 A Chicago Cubs flag flies out side of a bar in Wrigleyville before the game against the Milwaukee Brewers and the Chicago Cubs at Wrigley Field on July 24, 2020 in Chicago, Illinois. The 2020 season had been postponed since March due to the COVID-19

CHICAGO - From the back patio at Nisei Lounge to the sudsy sidewalks around Murphy’s Bleachers, the fight is on. Same for Sluggers, The Cubby Bear and everywhere in between.

The goal is tomorrow. If you get to tomorrow, it’s the next day. All over Wrigleyville — the quirky neighborhood that surrounds Wrigley Field, the longtime home of the Chicago Cubs — they are counting pennies, searching for help and dreaming of a return to normalcy.

“We have no choice but to make it through this,” said Zach Strauss, who runs Sluggers with his brothers David and Ari after their father, Steve, opened the bar in 1985.

Businesses all over the country know exactly what Zach Strauss is talking about — and share the stress he carries around with him. But the coronavirus pandemic has been especially hard on businesses that rely on ballpark traffic, eliminating crowds at major league games, and leading to rules that limit the amount of people they can have inside their doors at the same time.

Now those crowds are gone.

Hundreds of people tried jamming into Guthrie’s Tavern in Wrigleyville Tuesday night after the bar announced it is permanently closing on Thursday because of the city’s new COVID restrictions.

“We rely on that 40,000-fan-a-game foot traffic and seasonal tourism each year in order for us to be successful, and unfortunately all of us right now are witnessing what life is like on the polar opposite side of that,” said Cristina McAloon, the director of retail for Wrigleyville Sports.

Just off an expressway south of downtown, the area immediately around Guaranteed Rate Field, the home of the White Sox, doesn’t have as many businesses packed together as Wrigleyville. But they are struggling as well.

“Surviving. It’s survival mode right now,” said Salvatore Pappalito, who owns Morrie O’Malley’s, a hot dog and burger place near the ballpark. “You make your adjustments as best you can, from food to labor to everything else, and make sure you can cover the bills.”

Among the ballpark businesses in Chicago, the pandemic has been particularly hard on the old-style taverns that just serve alcohol. They were among the last establishments to reopen, watching while bars with food menus got a head start.

Guthrie’s Tavern — a popular Wrigleyville spot known for its board games — shut down in July on the same day the city announced it was once again suspending indoor services for bars. With no outdoor seating, Guthrie’s ownership said in a Facebook post they didn’t see a way they could survive.

“When that place went down despite everything they had done to stay open, because they didn’t have outdoor space, we’re like ‘Holy hell. We need to watch every nickel and dime because that place was packed every weekend all year long,’” said Pat Odon, the director of beer and baseball operations for Nisei Lounge.

Looking for a bridge to a vaccine, some ballpark businesses are leaning on revenue streams or avenues that were previously lower on their priority list. They also are tapping into government help when possible; Nisei Lounge, Sluggers and Wrigleyville Sports were among the small businesses who received loans through the Paycheck Protection Program, and Nisei also was approved for a grant from the state.

Nisei sold cardboard cutouts, mimicking the promotion at ballparks across the country. Sticking to the spirit of the eccentric spot — a fierce advocate for day baseball and the Oxford comma, and an opponent of the designated hitter — Charles Comiskey, the Hall of Fame founder of the crosstown White Sox, and a kindergarten picture of a patron are among the new customers saddled up at the bar.

“We’re down easily 80% from a regular baseball season,” Odon said. “But weirdly, we’ve started doing merchandise. You never get into owning a bar to sell T-shirts, but that’s helping us get where we can make it till there’s a vaccine. And we’ve applied for every grant. We finally hit on one. We got PPP, so we can make it, if we watch our money and play it tight, until next season.”

Sluggers has indoor batting cages, dueling pianos and games like Skee-Ball. But it’s leaning on its kitchen right now.

“We were forced to change our whole concept into based as a restaurant, and have people as they enter our building be seated with a host or hostess,” Zach Strauss said. “You know, instead of the live, get crazy atmosphere. We’re the opposite of social distancing.

The pandemic could lead to more change for a densely populated neighborhood that has been made over in a variety of ways in recent years, including a new hotel across the street from Wrigley and an office building for the Cubs.

While ongoing construction could help bring more people to the area, Wrigleyville only gets really busy when its iconic ballpark entertains its usual crowds for games and concerts.

“This is hurting Wrigleyville. It’s hurting all businesses,” said Maureen Martino, the executive director of the Lakeview East Chamber of Commerce.

“Really, Wrigleyville depends on this baseball season to carry them through the winter. So you know, when we’re looking, what’s going to happen in December, January and February?”

Sitting on the back patio at Nisei on a beautiful summer day, Odon paused to let an elevated train rumble away behind him. Then he took a big swing at a complicated pitch.