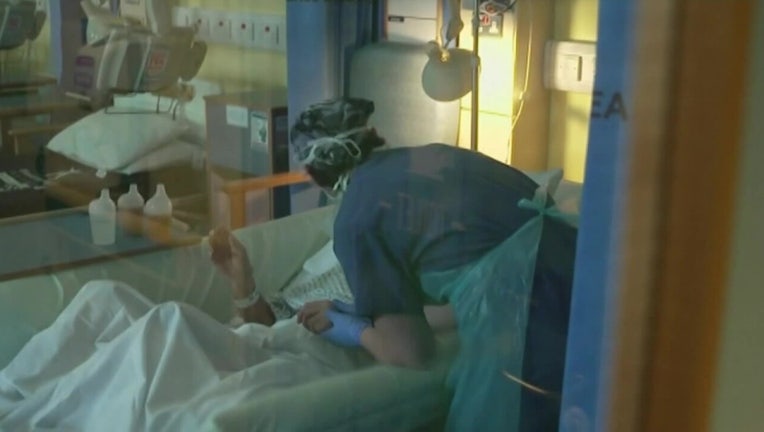 DALLAS - Parkland Hospital in Dallas, Texas, was caring for about 170 coronavirus patients as of Tuesday, and one tragic case produced a cautionary tale.

Dr. Joseph Chang, chief medical officer at the hospital, told a local news outlet about a patient in her 20s who went to a party with friends and got COVID-19.

"Before she was symptomatic, she visited her 80-year-old grandparents and they got sick,” Chang told WFAA.

The patient and her grandparents were admitted to the intensive care unit at Parkland, but the young woman didn’t know it because she was intubated and unconscious. After 10 days, she woke up and found out her grandfather had died the day before.

READ MORE: Nurse who was in coma for 40 days due to COVID-19 applauded by colleagues after hospital discharge

Chang told WFAA he’s concerned about the toll on his staff after they witness such profound grief.

“The fatigue on people’s faces is something that’s hard to quantify,” he said. “It’s hard for me to describe.”

According to the outlet, Chang is now mandating employees take days off. Parkland Hospital has four isolated wards focused on treating COVID-19 patients.

While Chang said the hospital has seen a leveling off of new hospitalizations over the last week, he cautioned it wasn’t enough data to call it a trend. He connected the leveling off to the mask mandate in Texas that took effect on July 3.

He also noted that about 1 percent of COVID-19 patients at the hospital dies.

“It’s far lower than nationally reported rates,” he said of Parkland’s mortality rate. “But who’s the 1 percent? Do you want to be the 1 percent? I don’t know who the 1 percent is going to be. You know, no one really does.”

Meanwhile, Chang continues to worry over his colleagues and encourages North Texas to thank medical professionals.