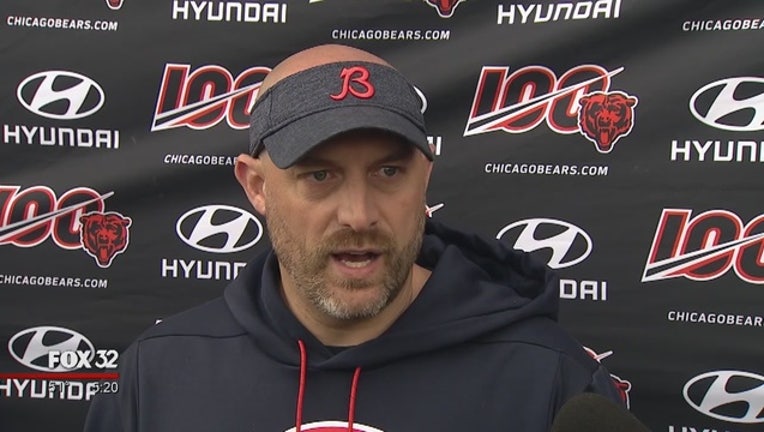 LAKE FOREST, Ill. (AP) - Eight kickers walked onto the practice field at the end of Friday's rookie camp session as the Chicago Bears began trying to solve their greatest problem through a mass offseason kicking competition.

Coach Matt Nagy lined the 70 rookies at the weekend camp along the 50-yard line behind the eight kickers, watching as each attempted a 43-yard field goal, the same distance Cody Parkey missed with a double-doink to end Chicago's season in a 16-15 playoff loss to the Philadelphia Eagles.

Out of a snap and hold, without a pass rush, only two of the eight kickers made the 43-yard field goal.

Back to the drawing board?

"This is going to be a little bit of a process," Nagy said.

It already has been.

The Bears had Chris Blewitt, Elliott Fry, Redford Jones, John Barron II, Casey Bednarski, Emmit Carpenter, Spencer Evans and Justin Woo on hand for the start of this competition at rookie camp after holding several tryouts already in the offseason. Blewitt, Fry, Jones and Barron were the kickers who had already been signed, and the other four were brought in for tryouts at the rookie camp.

Only Barron and Evans made the 43-yard kick. When the kickers had competition amongst themselves away on another practice field, Fry and Jones stood out.

Fry was a kicker in the Alliance of American Football and went 14 for 14 with Orlando, and is the only one of the eight with any real professional experience.

Nagy was immediately asked about the poor performance after practice.

"I'm surprised you're starting with that question," Nagy said, laughing.

Nagy said it was no coincidence they started the post-practice competition from the 43-yard line, and the kickers are well aware.

"They know, they already know," Nagy said. "They know loud and clear why."

Nagy called it a case of adding, "somebody that has expertise in that, and understanding a lot more than I know."

Nagy said there are no current plans to send these kickers to Soldier Field for their competition, but it could be something they'll consider.

The goal for the kicking competition held at the end of practices is to create pressure.

"We want to be able to see as much as we can in game situations how they handle that, too," Nagy said. "Because it's one thing to be able to go over and bang 8 for 8 when it doesn't really matter. But what about when it matters. Ya know?"

There is no timetable for reducing the number of kickers at the moment.

"I think that's really gray for us," Nagy said. "We start with a lot. In the end, end with one. Right?

"So how are we going to do it? If a guy has a rough day, does he bounce back and have seven good days? Does he not? I don't know."

Nagy said after last weekend's draft that he's over the 43-yarder Parkey missed now, and doesn't mind people mentioning it in his presence.

"So we feel good about it and we're gonna get this thing right."