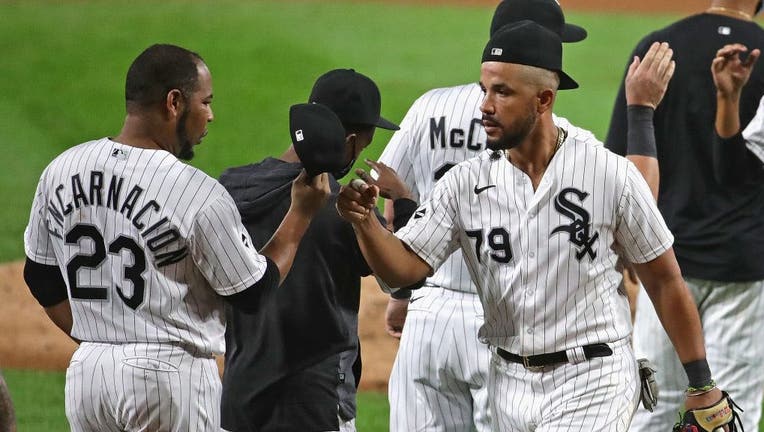 Edwin Encarnacion #23 (L) and Jose Abreu #79 of the Chicago White Sox celebrate a win over the Detroit Tigers at Guaranteed Rate Field on September 12, 2020 in Chicago, Illinois. (Photo by Jonathan Daniel/Getty Images)

CHICAGO - José Abreu hit a pair of three-run home runs and matched a career high with seven RBIs, and the Chicago White Sox beat Detroit 14-0 on Saturday night for their eighth straight win against the Tigers.

Abreu went 4 for 4 a day after his career-best 22-game hitting streak ended. It was the longest streak in the majors this season. Tim Anderson also had four hits, and Eloy Jiménez added three for the AL Central-leading White Sox, who have won seven of eight.

Jorge Bonifacio doubled for the Tigers’ lone extra-base hit. They have lost eight of 11.

The White Sox, who finished with 19 hits to Detroit’s five, are 8-1 against the Tigers this season.

Reynaldo López (1-2) allowed three hits in five shutout innings for the White Sox — his first scoreless outing since Aug. 25, 2019 against Texas. He was recalled from the team’s alternate site Thursday after Dallas Keuchel went on the 10-day injured list with back soreness.

Abreu has 17 multihomer games in his career. His last was Aug. 22 against the Cubs, when he hit three.

Abreu hit his first three-run shot off Daniel Norris in the fourth and another against Rony García in the fifth. In his previous 13 games, Abreu homered just once.

Nomar Mazara hit a two-run double to extend the White Sox lead to 5-0 in the third and chase Michael Fulmer (0-2), who hasn’t won a game since June 14, 2018, before missing last season due to Tommy John surgery. He allowed five runs and nine hits in 2 2/3 innings, raising his ERA to 9.27.

Abreu also singled to drive in a run in the first to help build a 3-0 White Sox lead.

Tigers: RHP Jordan Zimmermann (right forearm strain) is expected to move to the bullpen. He returned from the 45-day IL Thursday and allowed an unearned run in three innings against St. Louis in his season debut and possibly final start with Detroit. “We’re going to be careful with him,” manager Ron Gardenhire said.