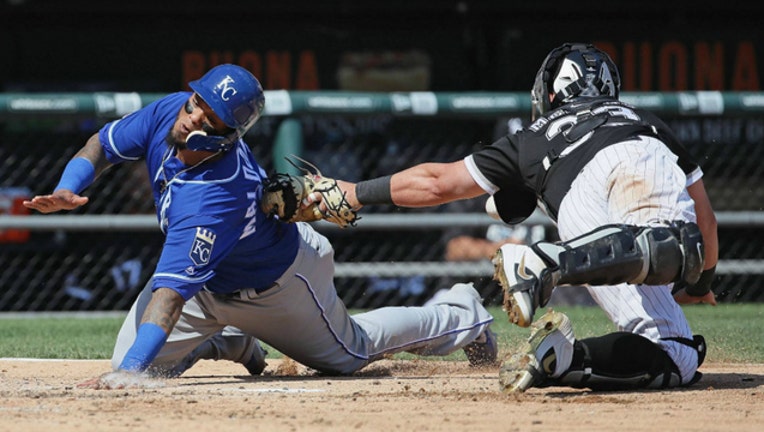 Martin Maldonado #16 of the Kansas City Royals scores a run in the 5th inning as James McCann #33 of the Chicago White Sox drops the ball at Guaranteed Rate Field on April 17, 2019 in Chicago, Illinois. (Photo by Jonathan Daniel/Getty Images)

CHICAGO (AP) - Tim Anderson says he isn't sure what he did to rile up the opposing pitcher or get ejected from the game.

But he's certain of this much: He's not changing his ways.

And if flipping a bat to celebrate a towering home run offends the other team, so be it.

"It's all confusing," he said. "I'm the one that ended up in the locker room, and I was the one that got hit by a pitch."

The fiercely energetic Anderson spiked his bat following a home run and Kansas City's Brad Keller responded by drilling him with a fastball in his next at-bat, setting off a benches-clearing fracas in the Royals' 4-3, 10-inning victory over the Chicago White Sox on Wednesday.

Anderson tossed his bat toward the White Sox dugout following his two-run drive in the fourth inning. Keller hit him in the buttocks with his first pitch leading off the sixth.

Anderson, the AL's leading hitter, was restrained by Royals catcher Martin Maldonado but kept jawing with Keller on the way to first base. The dugouts and bullpens emptied, though no punches appeared to be thrown. White Sox manager Rick Renteria and Royals bench coach Dale Sveum shoved each other, and the usually mild-mannered Renteria was particularly animated.

There were four ejections - Anderson, Keller, Renteria and Sveum.

Though Keller insisted he wasn't trying to hit anyone, Kansas City's Hunter Dozier said Anderson should have expected retaliation.

"And once you get hit, just deal with it and go to first. That's my take on it," said Dozier, who hit a tiebreaking homer in the 10th.

Anderson has often talked about encouraging players to express themselves, something Major League Baseball has tried to embrace with its "Let the Kids Play" marketing campaign. But not everybody in the game sees it the same way.

"I'm going to continue to be me and keep having fun," Anderson said. "Our fans, they pay their hard earned money to come to the ballpark to see a show so why don't I give them one."

The 25-year-old Anderson and the Royals have mixed it up before.

In April 2018, Anderson shouted after a home run against Kansas City. Later in the game, he was playing shortstop when Royals star catcher Salvador Perez reached second base. Words were exchanged and the benches cleared.

When the tempers cooled, Perez and Anderson shook hands. Perez said Anderson had hollered a few weeks earlier when he homered twice on opening day.

Anderson also has a history with crew chief Joe West, who he called "terrible" after getting tossed from a game against the crosstown Cubs in September.

West had little to say Wednesday, telling a White Sox spokesman: "Because of the language that was used on the field, the umpires declined comment."

"Get him out. You want him to not do that? Get him out," Renteria said.

He also called his flare-up with Sveum a "misunderstanding" in the heat of the moment with players and coaches slow to clear the field.

"He just got excited and said, 'Get your team back, get your team in the dugout,'" Sveum said.

That angered Royals manager Ned Yost, who said, "We've got no issues but I'm not going to allow anybody to yell at my team."

Dozier connected leading off the 10th against Nate Jones (0-1). His drive to left on a 2-0 fastball made a winner of Wily Peralta (2-1), who worked two innings.

Scott Barlow pitched in the 10th for his first career save, getting Daniel Palka on a game-ending grounder after walking Leury Garcia. Keller gave up two runs and four hits. And the Royals picked up their first win in six road games this season.

Palka singled batting for Yoan Moncada in the seventh to break an 0-for-32 skid to start the season and got optioned to Triple-A after the game.

White Sox starter Lucas Giolito left with two out in the third because of tightness in his left groin.

Giolito - 4-0 in eight starts against Kansas City - seemed to feel discomfort throwing a 1-1 pitch to Alex Gordon. He stretched his leg and took a few warmup tosses before heading to the dugout and was to be re-evaluated.

Giolito did not allow a run or hit in 2 2/3 innings. The 24-year-old right-hander struck out five, walked one and hit a batter.

Royals: Maldonado was in the lineup after being scratched Tuesday because of an illness.

White Sox: Moncada had a headache but no concussion after being lifted for precautionary reasons in the seventh. He was shaken up stealing second in the fifth inning, when Maldonado's throw hit his helmet as he was diving. ... The White Sox have no timetable for OF Jon Jay (strained right hip) going on a rehab assignment. Renteria said he is "just scratching the surface now of increasing some of his activities" after being placed on the 10-day injured list during spring training.

Royals: RHP Homer Bailey (1-1, 5.29) tries to win his second straight start when the Royals open a four-game series at the New York Yankees. RHP Domingo Germán (3-0, 1.38) pitches for the Yankees.

White Sox: RHP Iván Nova (0-2, 5.28) tries for his first win with the White Sox as Chicago opens a four-game series at Detroit. The veteran took the loss at New York on Saturday despite holding the Yankees to one run over six-plus innings. RHP Tyson Ross (1-2, 3.50) starts for the Tigers.