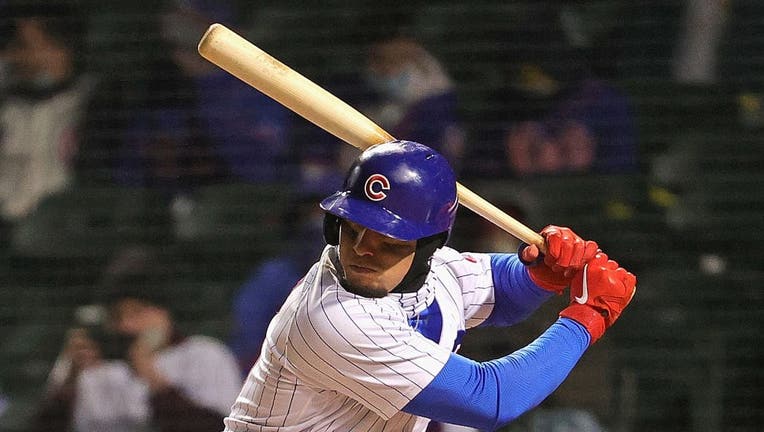 avier Baez #9 of the Chicago Cubs bats left-handed in the 8th inning against the New York Mets at Wrigley Field on April 21, 2021 in Chicago, Illinois. The Cubs defeated the Mets 16-4. (Photo by Jonathan Daniel/Getty Images)

CHICAGO - Javier Báez insisted he was seeing the ball well and had his timing down, though his approach was a little off and the results weren’t what he wanted.

This time, everything clicked.

Báez hit a grand slam and the Chicago Cubs took advantage of a season-high four errors by the New York Mets in a 16-4 romp on a chilly Wednesday night at Wrigley Field.

Báez, who struck out four times Tuesday, scored three runs in this one and hit his sixth career slam off reliever Trevor Hildenberger in the sixth inning to make it 14-4. The flashy shortstop became the first player to go 0 for 4 with four strikeouts in one game and then hit a grand slam in the next since Gorman Thomas did it for Milwaukee in the first two games of the 1978 season, according to STATS.

Chicago scored its most runs since putting up 16 against Pittsburgh on Sept. 15, 2019. The fact that they scored 10 without the longball before Báez connected was a positive sign for manager David Ross.

"There were some balls well-hit even before that, a lot more of a line-drive approach I feel like, staying up the middle, and I think that’s where you see the singles come from — a couple groundballs getting through there, just out of the reach of their infielders," he said. "Use the big part of the field and trusting and staying within your approach."

Francisco Lindor hit his first homer for New York, and Pete Alonso launched a mammoth shot onto Waveland Avenue. But the Mets have lost the first two games of the three-game series.

Lindor connected against Zach Davies in the first. J.D. Davis made it 2-0 with an RBI double in the third, but things turned around in a big way in the fourth.

The Mets committed three errors in a seven-run fourth to match their highest total in an inning since April 16, 2019, at Philadelphia. The Cubs sent 10 batters to the plate and chased David Peterson (1-2) on the way to their most lopsided win of the season.

Anthony Rizzo drove in the first Chicago run with a single, and things unraveled for the Mets from there. The Cubs loaded the bases when Davis booted Báez’s grounder to third for his third error in two games and tied it when Duffy walked. Bote gave Chicago a 4-2 lead with a two-run single to shallow right, and the runners advanced when right fielder Michael Conforto’s throw home bounced past the catcher.

Jake Marisnick drove in a run with a grounder. Pinch-hitter Eric Sogard, batting for Davies, lined an RBI single. And the Cubs got another run when Lindor threw wildly from shortstop to first on Ian Happ’s infield single, allowing Sogard to score from second. Happ got caught for the third out trying to get back to the bag after rounding first.

Mets: CF Brandon Nimmo was held out because of a stiff right hip. Mets manager Luis Rojas said Nimmo felt the issue a little more when he woke up Wednesday after playing through it the previous night.

Cubs: Bullpen coach Chris Young was back after being away from the team because of a positive COVID-19 test.

RHP Trevor Williams (2‐1, 5.02 ERA) looks to win his second straight start, while LHP Joey Lucchesi (0-1, 5.40) gets the ball for the Mets with two-time NL Cy Young Award winner Jacob deGrom pushed back to Friday at home against Washington. Williams is 3‐1 with a 2.08 ERA in four starts against New York. Lucchesi worked three innings in New York’s 7-2 loss at Colorado during a doubleheader on Saturday.