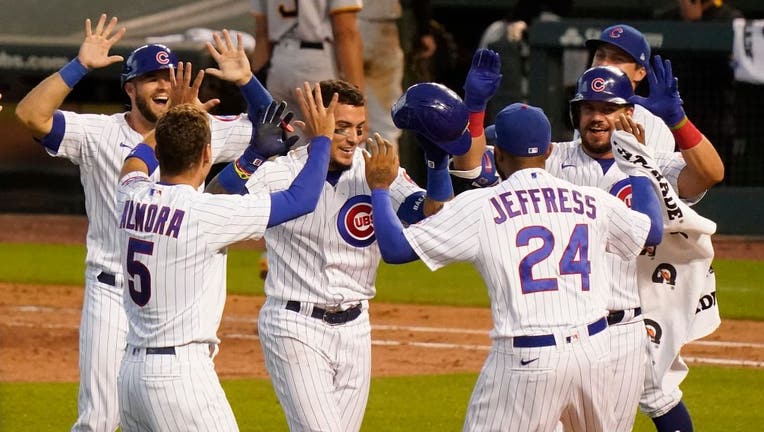 Javier Báez of the Chicago Cubs celebrates with teammates after his RBI single during the eleventh inning against the Pittsburgh Pirates at Wrigley Field. (Photo by Nuccio DiNuzzo/Getty Images)

CHICAGO - Javier Báez singled through a drawn-in infield in the 11th inning, scoring David Bote from third base and giving the Chicago Cubs a 2-1 victory over the Pittsburgh Pirates on Sunday.

Bote, who made the last out in the 10th, started the inning on second base as mandated by Major League Baseball’s extra-inning rule for the pandemic-shortened season. He advanced to third on a deep fly to right by Anthony Rizzo and jogged home on Baez’s first career game-ending hit against Cody Ponce (0-1).

Jeremy Jeffress (1-0) worked a scoreless 11th for the win.

The game was delayed 64 minutes by rain before the bottom of the ninth.

Chicago has won 10 straight games against Pittsburgh at Wrigley Field. The Cubs outscored the Pirates 81-31 in the previous nine games, hitting 24 homers during that span.

In both the 10th and 11th innings, the Pittsburgh runner on second base to start the inning made a baserunning out. In the 10th, catcher Jacob Stallings tried to score from second on a single by Josh Bell with no outs and was thrown out by left fielder Kyle Schwarber. In the 11th, Kevin Newman was thrown out at third trying to advance on a grounder to shortstop.

The Pirates took a 1-0 lead in the first on Newman’s first homer of the season.

After being held without a baserunner in the first four innings, the Cubs tied it at 1 in the fifth. Willson Contreras led off with a double and Schwarber followed with a liner off the wall in center for an RBI double.

Chicago star Kris Bryant was out of the lineup for a second straight game, a day after reporting a stomach ailment. Bryant was tested for the coronavirus on Friday and Saturday, and the Cubs said both tests were negative. He is scheduled to be tested again on Monday.

“He really needs to be commended for going in and getting checked out,” Ross said.

Pirates: RHPs Mitch Keller and Michael Feliz were placed on the 10-day injured list before the game after each had to leave Saturday’s 4-3 loss because of injury. Keller started and left in the third with left side discomfort. Feliz departed in the eighth with right forearm discomfort. RHP Cody Ponce and LHP Sam Howard were activated from the taxi squad.

Cubs: RHP James Norwood (shoulder) was placed on the 10-day IL, and LHP Justin Steele was recalled from the team’s camp in South Bend, Indiana.

Pirates: Lefty Derek Holland (0-0, 3.18 ERA) takes the mound Monday night in the opener of a two-game series at Minnesota.

Cubs: Righty Alec Mills (1-0) makes his second start of the season in the opener of a two-game series against Kansas City at Wrigley on Monday night.