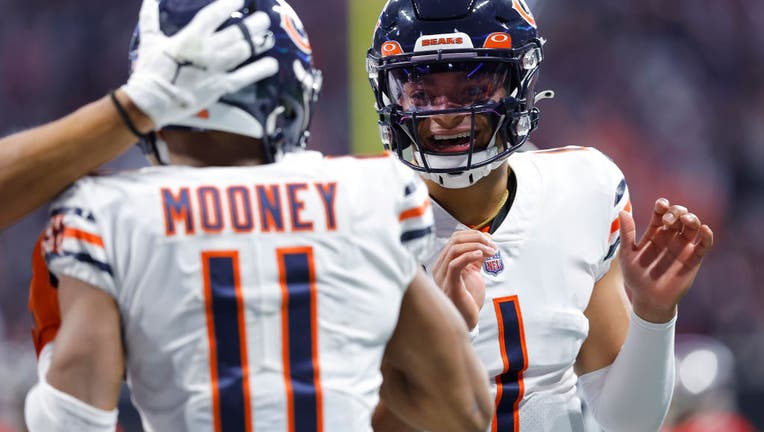 LAKE FOREST, Ill. - The Chicago Bears had no one on their injury report just over a month ago when they played the New England Patriots.

A handful of players joined quarterback Justin Fields on the sidelines with injuries in the Bears’ 31-10 loss to the New York Jets on Sunday, including a pair of team leaders in wide receiver Darnell Mooney and safety Eddie Jackson.

Bears coach Matt Eberflus said Monday that Mooney needs ankle surgery and will be lost for the rest of the season. Chicago is still having Jackson’s foot injury evaluated, but in the midst of a 3-9 season — and a five-game losing streak — the last thing the Bears need is to lose more players.

"Eddie goes down, Darnell Mooney goes down, you have a couple of guys go down," Eberflus said. "The other guys got to step up and the other guys have to get into different positions and operate and I think we need to do a better job of that."

Mooney is the Bears’ leading receiver with 40 receptions, while Jackson went into Sunday’s game with a team-high four interceptions, tied for third in the NFL.

Losing Mooney deprives Fields of his favorite target — when he does return. Eberflus said Fields remains day to day with a shoulder separation.

"Once we got going into the offense, I think (Mooney) really started to shine," Eberflus said. "Outstanding at blocking the perimeter, he had a really nice connection with Justin throughout that stretch. He is our leading receiver.

"But more importantly, he is a great teammate. He’s a great leader. No one puts more yards in than Darnell Mooney. I’ll promise you that. He laps people. He doubles them up."

The injury to Jackson, combined with a concussion Jaquan Brisker already had and a hamstring injury to Dane Cruikshank, left the Bears playing their only two remaining safeties Sunday: DeAndre Houston-Carson and rookie seventh-round pick Elijah Hicks.

"I mean, Eddie is, in my opinion, the best in the game," Houston-Carson said. "A great teammate. Obviously, it hurts us. But we just have to find a way to try to find that production from other people."

The running game. It works even without Fields and injured running back Khalil Herbert. The Bears ran 29 times for 127 yards. David Montgomery had 79 yards on 14 attempts. The 127 yards were six over the league average, but well below their league-leading average of 192 yards a game because of Fields’ absence.

Pass defense. The Bears gave up 315 yards passing to Mike White, who made his first start this season. It was the most yards passing they’ve allowed by a quarterback this year. The injuries in their secondary and a struggling pass rush didn’t help.

Chase Claypool. Acquired for a second-round draft pick, Claypool made a real impact downfield for the first time with catches of 31 and 20 yards. The 31-yarder set up their first touchdown.

Defensive end Al-Quadin Muhammad. The starter at right end hasn’t had a sack in the last four games, has one on the season and has not made a tackle for loss. The sack Muhammad had four weeks ago was the only one by a Bears defensive end since Week 2.

1 — The Bears converted only one third-down situation in seven tries in the second half Sunday.

The Bears host the Green Bay Packers at Soldier Field on Sunday. The Packers beat them 27-10 at Lambeau Field in Week 2.