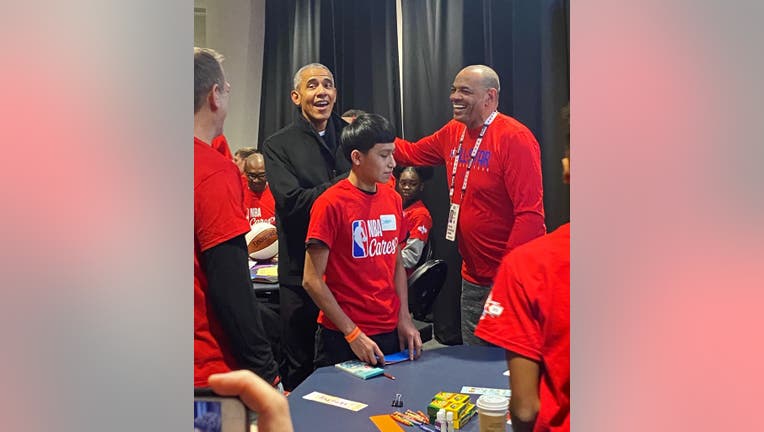 CHICAGO - Zion Williamson and Trae Young are used to meeting fans who are typically a bit nervous during those interactions.

This was different. This time, they were nervous to meet the fan.

Former President Barack Obama — a huge basketball fan, officially the game’s First Fan during his eight years in office — made an unannounced appearance Friday at an NBA Cares event during All-Star weekend in his hometown of Chicago with several of the league’s top rookies, second-year players and coaches. The event was for volunteers to fill several backpacks with school supplies, and that work predictably stopped when Obama walked into the room.

“You’re doing fantastic,” Obama told All-Star Luka Doncic of the Dallas Mavericks, who was seated at a table with Los Angeles Lakers assistant coach Jason Kidd when the 44th president made his way to their side of the room.

Obama gave Kidd a long embrace, then turned back to Doncic: “Don’t listen to him when it comes to shooting,” Obama quipped, clearly aware that Doncic is already a much better shooter than Kidd was in his career.

It was the first of multiple events for Obama during All-Star weekend: He’s scheduled to host a conversation with several top NBA players on Saturday, and it’s expected that he could appear at Sunday’s All-Star Game as well. Obama was at the event for more than a half-hour, spending the biggest chunk of that time manning a table alongside Williamson and Young.

They had the same initial reaction.

“It was crazy,” said Young, the 21-year-old Atlanta All-Star guard.

“It was crazy,” echoed Williamson, the New Orleans rookie and No. 1 pick in last year’s NBA draft.

Obama played the game as president and evidently still follows the NBA closely. He had no need for introductions; he knew who the players were, even greeting Miami rookie Tyler Herro by calling him “sharpshooter.”

Williamson, 19, said it could have been one of his coolest experiences to date, even topping when Obama came to see him play at Duke last season. The only other experience that could compare, he said, was going No. 1 in the draft.

“For him to have one of the most busy schedules, for him to keep up with all of us, hats off to him,” “I’ve got a lot of respect for him, just knowing us, knowing our stats. He said ‘career-high 32,’ man ... crazy.”

Williamson had a career-high 32 points for New Orleans in a loss to Oklahoma City on Thursday night. The next morning, he was blown away that Obama wanted to talk about it.

“Being able to stand next to him, talk to him, he basically knew everything about my game and my season, for him to know all that, it’s pretty cool,” Young said.

Obama shook every hand, stopping to talk to the kids, players, coaches and staff in the room. He didn’t take questions at the event but seemed particularly impressed by one boy who told him he had submitted a winning essay to earn the right to be there — though the Obama appearance was a surprise until the moment he walked through the door.

“There’s really nothing like it,” Lakers coach Frank Vogel said. “He’s a president, he’s a young president who is really beloved by all of America but in particular the NBA family. He’s so in-tune with our game and it was a great honor to meet him.”