LAKE FOREST, Ill. - The Chicago Bears are now without both of their top two draft picks.

Coach Matt Nagy on Wednesday said quarterback Justin Fields was out of practice due to a groin injury, while second-round pick, offensive lineman Teven Jenkins, was facing back surgery.

The injury to Fields is considered minor but Jenkins has been out all of training camp after suffering back injury symptoms during the four days rookies were allowed to practice just before the start of regular training camp.

Nagy didn’t consider Fields’ injury serious and holding him out of practice was precautionary. He wasn’t certain about Fields’ status for Saturday’s preseason game against Buffalo at Soldier Field.

"I’d say it’s too early to go there," Nagy said. "I just think that for him right now, again, we want to be able to get to that point where he’s able to play in that game. That’s very important."

The back injury with Jenkins is a far more serious matter. Jenkins missed the final three games of his final season at Oklahoma State with a lumbar issue. 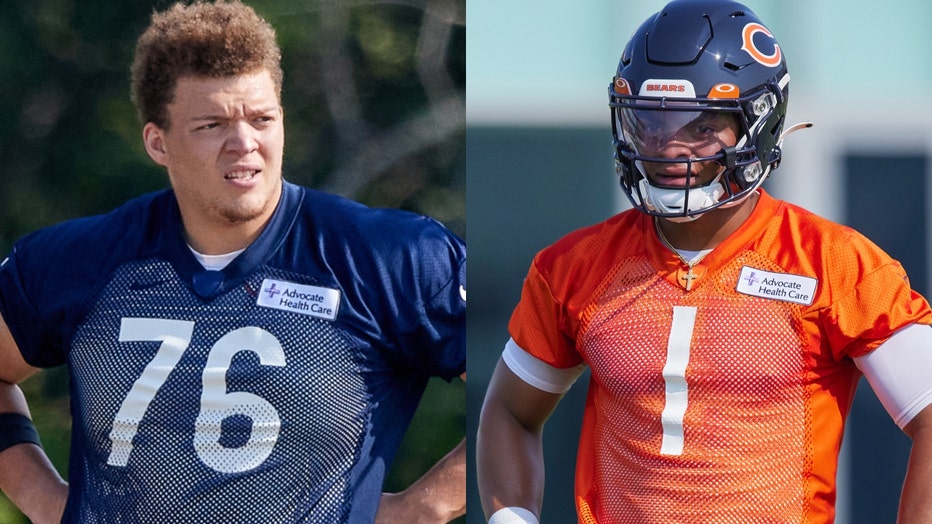 "You know we tried to hope to avoid the surgery with him, and we tried several treatments, but the goal is to get him back this season so that’s the most recent update with him," Nagy said.

Jenkins was able to go through offseason work at Halas Hall without a problem until those four days prior to the start of training camp.

"It’s something new so this is something — we were aware of the back issues in college, but these are symptoms that are new," Nagy said. "When you get to the word surgery, obviously everyone gets concerned, you don’t want to hear that. But the goal is to get him back this year."

The Bears had hoped to have Jenkins start at left tackle but now veteran backup Elijah Wilkinson is playing the position and the Bears have signed 39-year-old former Philadelphia Eagles tackle Jason Peters to compete for the spot. Peters is expected at camp later this week.

Notes: The Bears also were without tight end Cole Kmet at Wednesday’s practice due to a hamstring injury. Defensive end Akiem Hicks left practice without an explanation on Tuesday but Nagy said he was not injured and Hicks was on the practice field Wednesday.