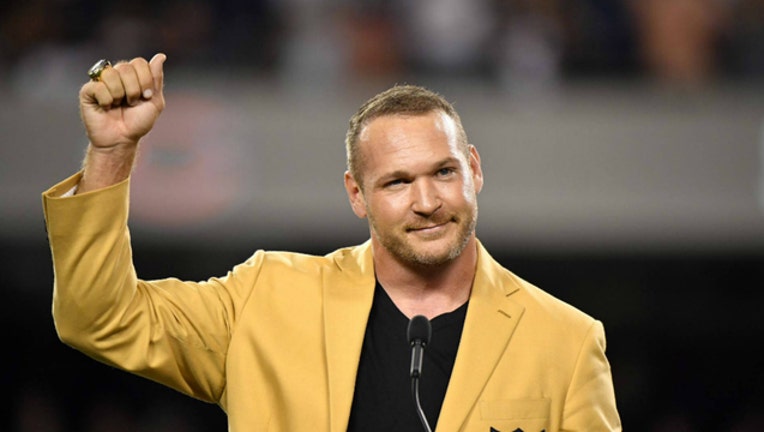 CHICAGO, IL - SEPTEMBER 17: Brian Urlacher is honored with a Ring of Excellence ceremony for his recent induction into the Hall of Fame at Soldier Field on September 17, 2018 in Chicago, Illinois. (Photo by Quinn Harris/Getty Images)

CHICAGO (AP) - Brian Urlacher finally got a chance to say goodbye, and he tackled the opportunity the same way he played for 13 seasons.

Urlacher was honored by the Chicago Bears at halftime of their 24-17 victory over the Seattle Seahawks on Monday night, after he was inducted into the Pro Football Hall of Fame this summer. He got his Ring of Excellence from Bears owner Virginia McCaskey, and the team also presented Urlacher and his family with a statue of the All-Pro linebacker.

The 40-year-old Urlacher, who rose to stardom at the University of New Mexico before he was selected by Chicago with the No. 9 pick in the 2000 draft, then blitzed through a quick speech thanking his family, former teammates and fans for their support over the years.

"This whole process, not just the Hall of Fame weekend, but this process of getting ready for this week," Urlacher said, "all my teammates, 15, 16 guys came back, I get a chance to see them, go to the facility, see a lot of people that worked there when I was there, it's awesome."

Urlacher spent his entire 13-year career in Chicago. He retired after the 2012 season when he was unable to come to terms on a new contract with the Bears.

He relished the opportunity to address the fans at Soldier Field for the first time since his career ended.

"It was amazing," he said. "You know I didn't get a chance to say goodbye. ... You don't ever know when it's your last game. I especially didn't know it was my last game."

Urlacher used his speed and physicality to become the Bears' all-time leading tackler. He also finished with 41 1/2 sacks, 22 interceptions and five touchdowns on two interception returns, two fumble recoveries, and one TD reception.

"With football, I never was as good as I think I could have been," he said. "That's the way I approached games and practices and stuff. I may have made some plays, but all the good plays I made, I felt I could have made more.

"After games at night, win, lose, whatever, I always felt like I could have done more, I could have played better, so it wasn't very hard for me to keep making myself think I could be better."