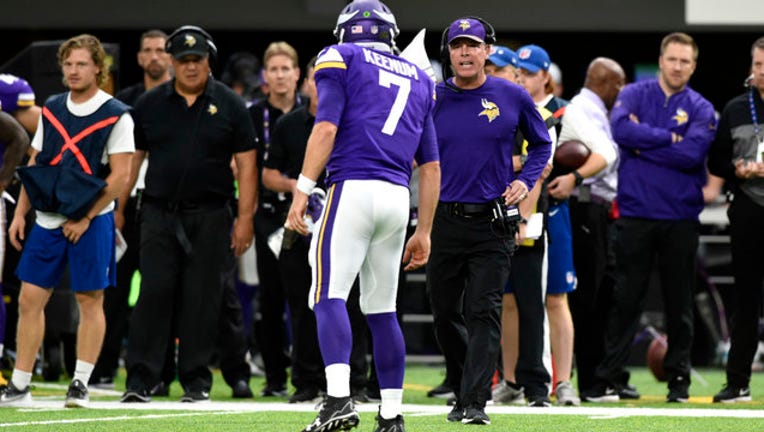 Case Keenum #7 of the Minnesota Vikings speaks with offensive coordinator Pat Shurmur in the second quarter of the game against the Detroit Lions on October 1, 2017 at U.S. Bank Stadium in Minneapolis, Minnesota. (Hannah Foslien/Getty Images)

Shurmur could be a strong candidate considering the Vikings have an effective offense despite early losses of quarterback Sam Bradford and running back Dalvin Cook on the way to the NFC North championship.

The Bears are looking to get the most out of quarterback Mitchell Trubisky. Shurmur helped journeyman Case Keenum emerge as one of the league's top quarterbacks after Bradford went down.

Shurmur was 9-23 as the Cleveland Browns' coach from 2011-12. He returned for a second stint as Philadelphia's offensive coordinator from 2013-15. He joined the Vikings as tight ends coach in 2016. He served as interim offensive coordinator for the final nine games that year following the resignation of Norv Turner and took over the job in 2017.

The Bears fired John Fox after a 14-34 record in three years and a .292 winning percentage that ranks as the second-lowest in franchise history. The Bears were 5-11 this season.