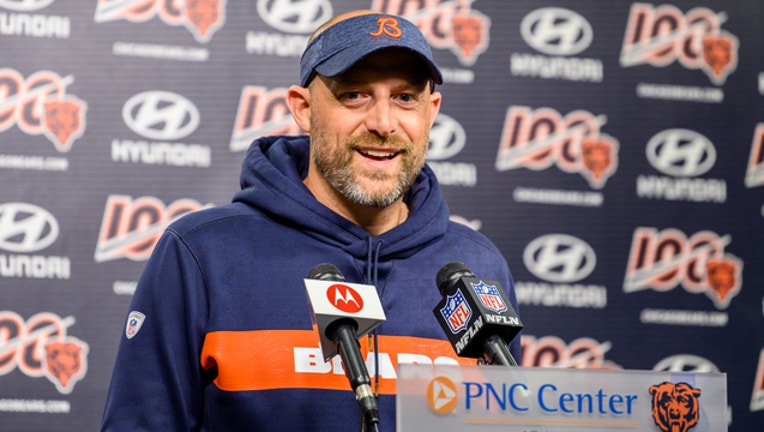 DECATUR, Ill. (AP) - Chicago Bears coach Matt Nagy figures his team can avoid the pitfalls of success that drag down so many other NFL teams following sudden improvement.

Whether it's possible for the Bears to duplicate last year's 12-4 season could depend on numerous factors, and it starts at kicker.

When Nagy and general manager Ryan Pace returned with team officials Sunday to the franchise's birthplace in Decatur to commemorate the Bears' 100th anniversary, they expected the questions about one unsolved problem from last year. It was a problem leading to the end of their season.

Cody Parkey's double-doink field goal miss against Philadelphia and his subsequent departure left the Bears with work to do at finding a kicker. On Friday in Bourbonnais at the start of camp, unproven Eddy Pineiro and Elliott Fry vie for the job after an exhaustive search.

Neither kicker has seized the job through offseason work and Pace said they're "dead even."

There are still kickers on other teams who could be cut and become available.

"In general we're watching every situation," Pace said. "Because sometimes these guys pop out of nowhere, as well"

Finding a kicker isn't the only issue as the Bears try to avoid becoming an NFC version of the Jacksonville Jaguars -- a team with a dominant defense that made a meteoric rise and then failed to follow up the next season.

The Bears hope to quickly re-establish the momentum they seemed to possess when Nagy earned NFL Coach of the Year honors in his first season.

"Understand that everything we did last year means nothing," Nagy said. "What it did is it helped our culture, but it means zero for the 2019 season. So we talked about it -- don't get complacent, remember the hurt. And that's my job to make sure that the coaches are doing it, Ryan's doing it, I'm doing it."

They're going to start out with at least one unforeseen injury problem.

The Bears signed Clinton-Dix, the former Redskins and Packers safety, as a replacement in free agency after losing free agent starter Adrian Amos to the Packers. Tight end Trey Burton and wide receiver Anthony Miller had offseason surgeries and might initially be given extra time off practice.

The development of quarterback Mitchell Trubisky continues to overshadow everything on offense, as the Bears hope to rise from 21st in yards gained.

Trubisky often missed open receivers last year, although his passer rating climbed to 95.4. The goal for his development is a simple one.

After trading Jordan Howard in the offseason, the Bears think they have their starting running back in either rookie third-round pick David Montgomery or veteran Mike Davis.

"I think based on what we saw in the offseason, it's exciting to see those guys go and I don't feel like we've skipped a beat," Pace said. "I feel like they feed off Chuck's energy and you see that out there."

Bears board chairman George McCaskey expressed hope it will all come together like last year, except with a Super Bowl win at the end.

"We think that it would be no more fitting a culmination of the celebration of our centennial than to win the Super Bowl," McCaskey said. "But we've got 31 other teams to worry about and they want the same thing."