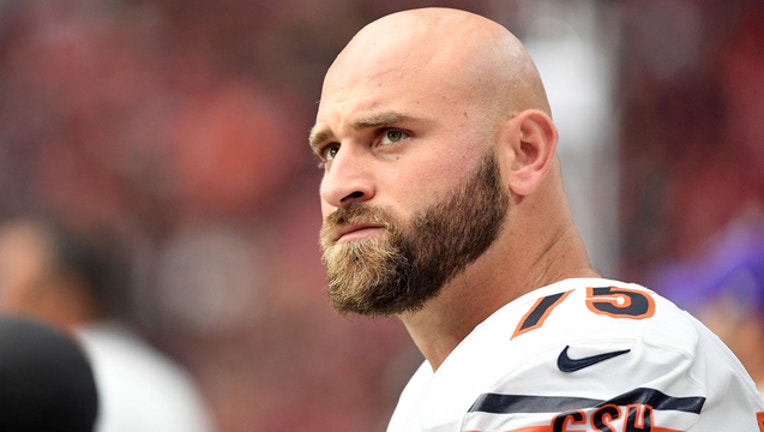 LAKE FOREST, Ill. (AP) - Chicago Bears right guard Kyle Long has a tendon injury in his right foot, and the team is deciding whether to put him on injured reserve.

Coach Matt Nagy said Wednesday the three-time Pro Bowl lineman has a boot on his foot and is "week to week." The Bears are still trying to figure out the "complete extent" of the injury.

Asked if Long has any broken bones, Nagy said, "I'm not going to get into the details of it." But he added there are "some issues" with a tendon.

The Bears could place Long on IR with the intent to return in eight weeks if they don't think he could be back sooner.

"Those are decisions we're going through," Nagy said. "We're not there yet. We don't need to be. Once we get to that point, then we'll decide what we want to do."

Long was hurt in the closing minutes of the Bears' 24-10 victory over the New York Jets on Sunday. Tight end Dion Sims rolled into him while the two were blocking for Jordan Howard on a run.

The injury to Long leaves the NFC North-leading Bears (4-3) in a painful and familiar spot with him as they get ready to visit the Buffalo Bills (2-6). Chicago could also be without star pass rusher Khalil Mack (right ankle) and No. 1 receiver Allen Robinson (groin) again. The two missed the win over the Jets.

Nagy again said the latest injury was not the same as the severe one to his right ankle in 2016 that required surgery. Long also had operations on his shoulder, elbow and neck after he was shut down last year.

"It's tough to hear news like that - one of our brothers and other family going down," quarterback Mitchell Trubisky said. "We're going to support him all the way and back him up and then it's next-man-up mentality. We've got a lot of depth at the O-line. I feel really comfortable with where we're at and who's stepping in there."

The Bears could move Eric Kush or rookie James Daniels from left guard, where they have shared time. Kush missed the game against the Jets because of a neck injury but is expected to play against Buffalo.

Another option at right guard is Bryan Witzmann. He signed with Chicago three weeks ago and made 13 starts last season for Kansas City while Nagy was the Chiefs' offensive coordinator.

One scenario that can apparently be ruled out is moving Cody Whitehair from center to guard, a position he has played. Nagy said the Bears haven't considered that.

"It's tough to see (Long) go down with the passion that he plays with," Whitehair said. "We hope for the best for him. I know we've got the right guys that will step in for him and give their best."

With Long out, the line loses not only one of its best blockers, but a team leader.

"He helps me a lot with technique stuff," Daniels said. "He also (tells me) if there's a certain look, just be alert for things like that. Both ways, it's nice to have him around."

NOTES: Nagy said the Bears will take a similar approach with Mack and Robinson, after both were held out of practice last week on Wednesday and Thursday and limited on Friday.