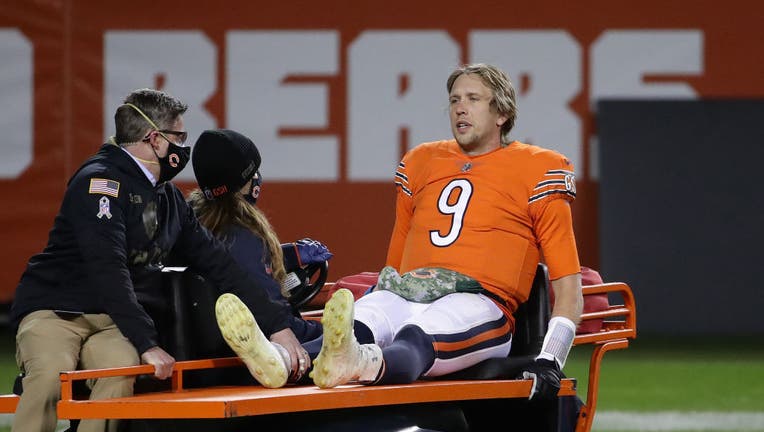 CHICAGO, ILLINOIS - NOVEMBER 16: Nick Foles #9 of the Chicago Bears is carted off of the field after being hit by Ifeadi Odenigbo #95 of the Minnesota Vikings during the fourth quarter of the game at Soldier Field on November 16, 2020 in Chicago, Ill

LAKE FOREST, Ill. - Chicago Bears coach Matt Nagy on Tuesday indicated a desire to keep his offense’s play-calling in the hands of coordinator Bill Lazor even after their lowest yardage output in almost three years during a 19-13 loss to the Minnesota Vikings.

Now he just needs to determine who can actually execute those plays on the field.

A hip and glute injury to Bears quarterback Nick Foles doesn’t seem as serious as it appeared when he was taken from the field Monday night on a cart, and it’s possible one of the Bears’ two injured quarterbacks could be available in two weeks when they come off a bye weekend to face the Green Bay Packers at Lambeau Field.

“It wasn’t as bad as we once thought,” Nagy said. “He’ll be working through that here as we go, keeping an eye on that, kind of day to day.”

Foles completed 15 of 26 passes for only 106 yards and was sacked twice Monday night as the Bears lost for the fourth straight time after they started with a 5-1 record. The Vikings had 11 hits on quarterbacks in the game.

Mitchell Trubisky had been benched during the third Bears game in favor of Foles, then two weeks ago suffered a right shoulder injury running the ball on his only play since the injury. On Monday night, Nagy expressed only uncertainty over Trubisky’s availability if Foles can’t play.

“I think there’s a possibility, but I don’t know that for sure,” Nagy said. “I think it’s going to be day by day. I don’t know if he knows that. So we’ll just keep an eye on that.”

The Bears have the bye week to wait for the quarterbacks’ health situation to improve and Nagy is willing to give Lazor a second shot at calling plays even after the offense failed Monday to score a touchdown for the second time in their past four games.

“I’m never going to right now say anything is for sure for different reasons because we’ve got time now, but with where we’re at I don’t think it’s in a good position to give him one game and this happens, and then all of a sudden you’re going back to the other way,” Nagy said. “So, yeah, I expect him to be calling the plays.”

Whoever plays quarterback will be trying to piece back together an offense now ranked 31st in the league in yardage and last in rushing.

A week off will let them sort through the problems.

“There’s a fine line in trying to change too many things, yet you still have that line of the definition of insanity, right, doing it over and over and expecting different results,” Nagy said. “When you have high-character guys and a strong culture, you find answers. You fight together, not against each other.”

The return game, and Cordarrelle Patterson in particular. Patterson broke Gale Sayers’ 53-year-old Bears record of 103 yards on a kick return for a touchdown by returning one 104 yards to start the second half against the Vikings. His eighth kick return TD tied him for the most in NFL history with Josh Cribbs and Leon Washington.

“Just to see him do the things he’s been doing since he came over here, he’s an athlete,” Bears safety Eddie Jackson said. “You can put him at running back, receiver, kick return, punt return, or whatever, but he came through in a time when we really needed him.”

It wasn’t just Patterson stepping up in the return game. After the Bears removed Dwayne Harris from the game following a fumbled punt and a triceps injury, wide receiver Anthony Miller broke the Bears’ longest punt return of the year with a 32-yarder.

The running game. Without starting running back David Montgomery available because of a concussion, the Bears ran for 41 yards and had only one rushing first down. It was a major factor in the offense gaining a season-low 149 yards, their lowest total since Dec. 3, 2017.

LB Roquan Smith. The third-year linebacker had a sack and had a 14-tackle night against Minnesota. He has a league-high total of 68 solo tackles, and led a defense that took the ball away twice from Minnesota — on Khalil Mack’s interception and Tashaun Gipson fumble recovery — but wasn’t backed properly by the Bears offense.

Jimmy Graham. The veteran tight end went without a reception Monday for the first time since the third week of the 2019 season when he was with Green Bay. The Bears had only one pass completion to a tight end Monday night, a 7-yarder to rookie Cole Kmet that was actually intended for another receiver.

Besides Foles and Harris, defensive end Akiem Hicks left the game with a hamstring injury.

2 — The Bears have two rushing touchdowns this season, which ranks last in the league. That’s also where they rank in rushing attempts and rushing yards. They’re 31st in yards per rush.

The Bears are off until Nov. 29 when they travel to face Green Bay (7-2) in a Sunday night game.