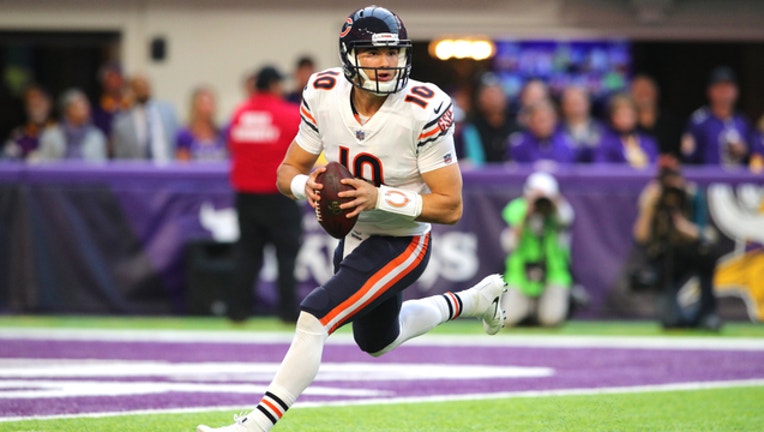 CANTON, Ohio (AP) - Ray Lewis and Brian Urlacher, two of the NFL's greatest linebackers, enter the Pro Football Hall of Fame this week. When their teams meet in Thursday night's preseason opener, the game could very well honor them by being a defensive battle.

On one hand, the Chicago Bears are installing a new offense under first-year coach Matt Nagy. On the other side, few if any of the Baltimore Ravens' starters at the offensive skill positions are likely to get much action.

So if this winds up 10-9 or something similar, well, the smiles on the faces of Lewis and Urlacher might get a bit broader.

Nagy has a second-year quarterback, Mitchell Trubisky, who will be taking his first major steps running the new scheme Nagy brought from Kansas City. He seems unconcerned that the second overall pick in the 2017 draft will be overmatched -- even though Trubisky has been an interception machine in practices.

"Our guys have picked up everything that we've asked them to do," Nagy said. "There have been mistakes, but they're way ahead of the learning curve. So that's exciting and it tells me that once we get to the regular season we can do more than I initially thought. But we will be growing throughout the season."

As for the Ravens, don't look for Joe Flacco in this one. The Hall of Fame game is an extra exhibition outing for the participants, and provides an opportunity for Baltimore coach John Harbaugh and his staff to look at first-round draft pick Lamar Jackson and veteran Robert Griffin III , who is attempting a comeback after not playing last year.

"We have that set," Harbaugh said of the QB plans for Thursday night. "I never really talk about that. We just go do it. But we have the quarterback rotation set, and then we'll organize the rest of it ... There'll be some guys who won't play in that game, probably you might guess the guys who haven't practiced as much that first week."

Some other things to watch in the Hall of Fame game:

The extra preseason contest usually gives low draftees, non-draftees and guys trying to catch on an additional chance to show their stuff. This isn't much different from the final exhibition game, when starters generally sit and others get a last chance to make a roster.

"When you have that extra game, the benefit is it gives you more reps for your players," Nagy said. "The negative is there's health risks, right? So people can get hurt. There's a fine balance of both of those and being able to understand which way you want to go, and right now I feel like our plan as a coaching staff for who we want to play and don't want to play, I feel really good about it."

Both teams have to find answers regarding their blockers. Baltimore has one of the best in the league in right guard Marshal Yanda, but he's coming off an injury-ravaged 2017 in which he made it into two games.

"That's why they call it training camp," Ravens OL coach Joe D'Alessandris said. "You have an idea of who are going to be your so-called projected players and starters, but that could change overnight. The same thing could happen during the season."

Considering how stationary Flacco can be, Baltimore needs to solve the offensive line issues quickly if he is its starter.

Trubisky at least can move around, and there's no question he will be the Bears' first-stringer. Guard Kyle Long's assortment of health issues doesn't help in the quest to solidify the line.

This is sort of a homecoming for Trubisky. He played at North Carolina but is from this area (Mentor, Ohio).

With the NFL's new policy on protocol during the national anthem in limbo as both the league and union discuss it, nothing really has changed from last season. Demonstrations by the players aimed toward awareness of social injustice could occur Thursday night.

With legal betting on NFL games in some states, there actually is a line on this game: Baltimore by 2 1/2 points. How the oddsmakers got there is anyone's guess considering there are 90 players on each roster and many of them will get on the field.