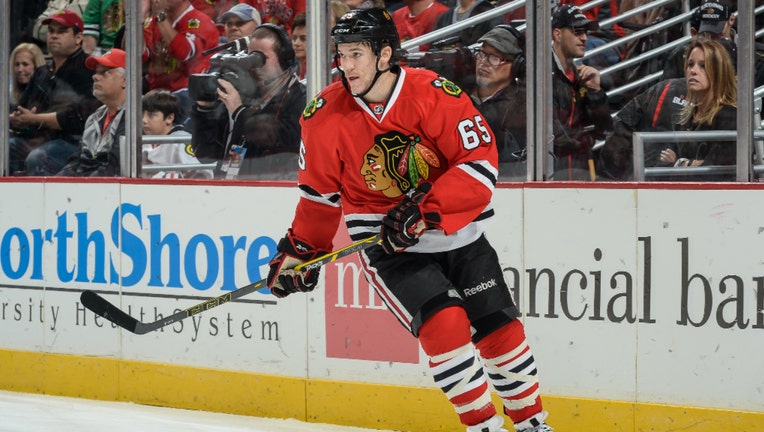 Andrew Shaw #65 of the Chicago Blackhawks watches for the puck during the NHL game against the Winnipeg Jets on November 02, 2014 at the United Center in Chicago, Illinois. (Photo by Bill Smith/NHLI via Getty Images)

The gritty forward, who played a key role in helping the Blackhawks win two Stanley Cup championships, announced his retirement on Monday citing the his long-term health as a primary reason behind the decision.

"There comes a time when every athlete needs to realize when their health is a priority and a future with their family is what is most important. That point for me is now," Shaw said. "After several concussions, doctors have strongly recommended I stop playing the game that I love. For once in my life, I am going to listen."

Blackhawks team physician Dr. Michael Terry said the club advised Shaw to consider the long-term consequences of repeated concussions he's sustained over his career, the most recent of which occured on Feb. 9 against the Dallas Stars.

"Though he has recovered, given the potential long-term consequences of repetitive concussions, we have advised him to discontinue his career as a professional hockey player," Dr. Terry said. "The Blackhawks are very supportive of his decision to prioritize his long-term health.

"Though it is unfortunate Andrew’s playing career is over, I admire him for making this difficult decision and putting his family and his well-being first," Bowman said. "Andrew will always have a home here in Chicago and we wish him and his family nothing but the best in the next chapter of their lives."

The 29-year-old native of Belleville, Ontario, played 10 seasons in the NHL, seven with Chicago sandwiched around three with Montreal. In all, the fifth-round draft pick in 2011 piled up 116 goals, 131 assists and 573 penalty minutes as he brought a grinding, pesky presence to the front line. The stats he was likely most proud of: A career plus-24 and 14 game-winning goals.

Generously listed at 5-foot-11 and 180 pounds, Shaw was a self-described "mutt" on a team with budding stars and quickly became a fan favorite in Chicago for his scrappy play. Many welcomed his return from Montreal last year.

He spent his first five seasons with the Blackhawks, helping them win the Stanley Cup in 2013 and 2015, and was part of one of the most memorable plays in franchise history. He was credited with a goal in the third overtime of Game 1 of the 2013 Stanley Cup Final against Boston when the puck went off his right shin pad and into the net. Two years later, he jumped in a goalmouth scramble and knocked the puck into the net with a soccer-style header in a game at Anaheim in the Western Conference Final, though it was disallowed.

Shaw said he would miss his teammates -- "though I might have been excessively loud, pulled a prank once or twice and given you a hard time, I always prided myself on keeping the mood light and being the best teammate I could be" -- and the fans: "Thank you all for giving a mutt a home, and a chance to live out my dream."

My first game as a rookie with the Chicago Blackhawks still sticks out in my mind. In my second shift, I had my first fight in the National Hockey League. I followed that up with my first NHL goal in the second period. From that point on, I knew I had a chance to be this team’s underdog. A player that could represent the city of Chicago’s blue-collar mentality. Be their mutt if you will.

There comes a time when every athlete needs to realize when their health is a priority and a future with their family is what is most important. That point for me is now. After several concussions, doctors have strongly recommended I stop playing the game that I love. For once in my life, I am going to listen.

I am extremely proud of what I accomplished in my career, and I want to make it clear; I would not change anything about it. I won two Stanley Cups, made lifelong friends – and some enemies, too – and will cherish those memories for the rest of my life.

To the Chicago Blackhawks organization, Stan Bowman, and Rocky Wirtz, thank you for taking a chance on a kid who was passed over twice in the NHL Draft. Without their belief in me, my underdog story would not have been written. I also want to thank the Chicago Blackhawks Medical Staff - Dr. Michael Terry, Mike Gapski, Jeff Thomas and Patrick Becker – for providing me with the best care I could have asked for throughout my seven years in Chicago as well as the equipment staff – Troy Parchman, Jimmy Heintzelman, Clint Reif and DJ Kogut – for keeping me sharp on the ice.

To my wife, Chaunette and my kids, Andy and Dax, thank you for always standing in my corner and being my biggest fans. Thank you to my parents, Doug and Darlene, my brothers, Jason and Joshua and my sister, Alex, for always believing in me and shaping me into the man I am today. Thank you to my agent Pat Brisson for always treating me like a big dog even though I was just a little guy. And lastly, a special thanks to my coaches, Joel Quenneville, Claude Julien and Jeremy Colliton. I hope it was as fun for you to coach me as it was for me to play for you.

I will miss the locker room and my teammates from both Chicago and Montreal. I hope they will miss me too. Though I might have been excessively loud, pulled a prank once or twice and given you a hard time, I always prided myself on keeping the mood light and being the best teammate I could be. It was a pleasure competing with you night in and night out.

Most of all, I will miss the fans. I was lucky enough to play in two of the best hockey cities and fanbases in the world in Chicago and Montreal and I am grateful for my experiences with all of you. I gave everything I had every night for you, and you are the reason this was one of the toughest decisions in my life.

Thank you all for giving a mutt a home, and a chance to live out my dream.