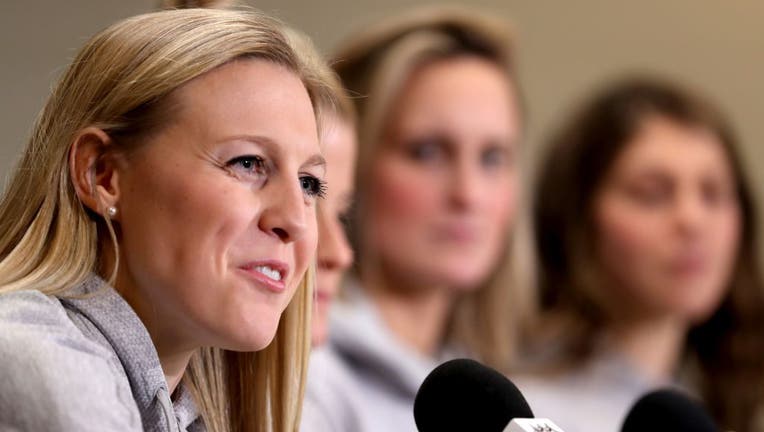 Kendall Coyne Schofield #26 of the American All-Stars speaks to the media prior to participating in the 2020 NHL All-Star Skills competition at Enterprise Center on January 24, 2020 in St Louis. (Photo by Chase Agnello-Dean/NHLI via Getty Images)

CHICAGO - Kendall Coyne Schofield figures there will be a time in her new role as player development coach that a Chicago Blackhawks prospect will razz her for preaching one thing and doing the opposite on the ice herself.

She’s not worried about how she’ll be received as a woman in a men’s professional sport.

“While I may be first female coach a lot of these players have worked with, I don’t see it being an issue,” Coyne Schofield said Monday. “Through my hockey career, I’ve been on the ice with so many players and I’ve earned the respect of those players through my skill, through my merit, and that’s what they’re going to see me as when I walk through the door as a coach.”

Coyne Schofield is the first woman to become a player development coach in the Blackhawks’ 94-year history. While planning to continue playing for the U.S. women’s national team, the 28-year-old will work with the coaching staff of Chicago’s top minor league affiliate in Rockford, Illinois, and serve as youth hockey growth specialist.

She joins a slowly growing list of women working in hockey operations for an NHL team. Retired Canadian star Hayley Wickenheiser is assistant director of player development for the Toronto Maple Leafs, while the expansion Seattle Kraken hired Hall of Famer Cammi Granato as a pro scout and Alexandra Mandrycky as director of hockey strategy and research.

Hockey hasn’t advanced as quickly as other sports, like in baseball, where Kim Ng became general manager of the Miami Marlins, or football and basketball, where women are full-time assistant coaches. Coyne Schofield hopes she helps that change.

“I think becoming the first female player development coach in Blackhawks’ history speaks volumes, and it’s definitely going to create the next opportunity for a young girl,” Coyne Schofield said. “I definitely do think it is part of the broader growth that we’re seeing for females in the sport of hockey.”

Coyne Schofield previously held broadcasting jobs with NBC Sports and the San Jose Sharks. She said a conversation with Granato made her want to move into hockey operations and she would like to move into coaching or management someday.

“Adding talented people with diverse and multifaceted backgrounds like Kendall, Erik and Juan enhances our operations as we assess the changing landscape of hockey at all levels and continue to build and maintain a system of elite hockey,” general manager Stan Bowman said in a statement. “Each of these individuals brings unique experience to their position.”

Condra will join Coyne Schofield working with the Rockford IceHogs after playing eight seasons in the NHL. Gonzalez was most recently a strength and conditioning adviser for USA Hockey’s National Team Development Program. Hunter had been senior executive assistant to Bowman before her promotion.