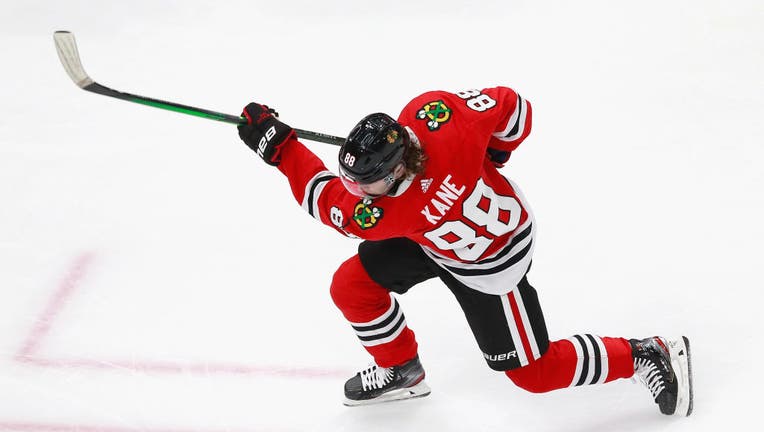 Patrick Kane #88 of the Chicago Blackhawks skates in warm-ups prior to the game against the Vegas Golden Knights in Game Four of the Western Conference First Round during the 2020 NHL Stanley Cup Playoffs at Rogers Place on August 16, 2020 (Photo by

CHICAGO - Sure, the front office of the Chicago Blackhawks is talking about its version of a rebuild. That just doesn’t matter too much to Patrick Kane.

The star forward looks around his only NHL team, the one he helped lead to three Stanley Cup titles, and sees opportunity.

"As a player, I feel like I’ve always been a guy that kind of just tries to better myself and try not to worry too much about other people’s jobs or what the next step is as a franchise," Kane said. "I think as a player, you want to win now. You want to compete now. And I think we can do that with this group. I think we can surprise some people."

That might not be too difficult considering the outside expectations after Chicago waved goodbye to longtime goaltender Corey Crawford in free agency and traded rugged forward Brandon Saad to Colorado. The availability of captain Jonathan Toews also is uncertain while he is away from the team to deal with an illness that has left him feeling "drained and lethargic."

Oh, and Kirby Dach and Alex Nylander could miss the entire 56-game season after each young forward had surgery last month.

Not exactly smooth sailing for a franchise that had enjoyed years of stability, headed by the steady presence of Toews, Kane and defensemen Duncan Keith and Brent Seabrook. But the Blackhawks sound as if they welcome what is being said about them.

"You’re aware of how we’re perceived, whether that’s through media or fans or across the league," coach Jeremy Colliton said, "and we got something to prove. It’s a challenge for us as the coaching staff but also the players we have, we’ve got to be relentless in how we’re going to work to get better."

Crawford’s departure leaves a gaping hole in net. Crawford, who played a key role in Chicago’s championships in 2013 and 2015, had a .917 save percentage and a 2.77 goals-against average last season. He also started every game as Chicago eliminated Edmonton in the qualifying round before losing to Vegas in the playoffs.

Malcolm Subban, Collin Delia and Kevin Lankinen are the front-runners for the starting job. But it could be a timeshare with the unusual schedule and the uncertainty surrounding the position. The 27-year-old Subban is the most experienced option with 66 career NHL appearances.

Adam Boqvist and Ian Mitchell lead a promising group of young defensemen who figure to get a long look this year. Boqvist was selected by Chicago with the No. 8 pick in the 2018 draft, and Mitchell was a second-round pick in 2017.

Boqvist, 20, made his NHL debut last season and finished with four goals and nine assists in 41 games. Mitchell, who turns 22 on Jan. 18, is heading into his first year with the Blackhawks after a standout collegiate career at Denver.

The absence of Toews and Dach puts more pressure on Dominik Kubalik to duplicate his success from last season, when he topped all NHL rookies with 30 goals. He also had 16 assists in 68 games, making a smooth transition to Chicago after playing in Switzerland.

Chicago brought in some help for its goaltenders by signing Mattias Janmark, Lucas Wallmark and Carl Soderberg — all responsible, two-way forwards — to one-year deals in free agency. Janmark, Wallmark and Soderberg have penalty-killing experience, and the Blackhawks lost a key member of their special teams when Saad was shipped off to the Avalanche.

If Chicago falls out of the playoff race, they also could be flipped at the trade deadline for more long-term assets.

The realigned Central Division is brutal, making for a tough schedule. The Blackhawks open with two games at Tampa Bay, the defending Stanley Cup champion. Then they visit former coach Joel Quenneville and the Florida Panthers.

Dallas, which lost to Tampa Bay in the Stanley Cup Final, also is part of the Central. Same for Carolina, Columbus and Nashville — all postseason teams in 2020.