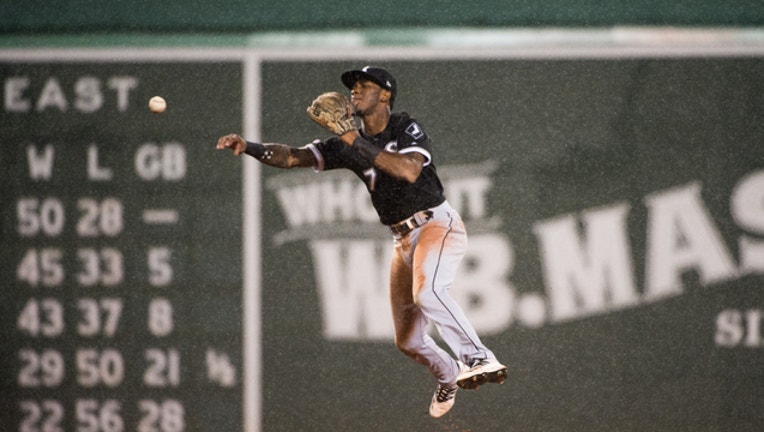 BOSTON (AP) - The Red Sox celebrated on a soggy field at Fenway Park, hoping they weren't really halfway through the season.

The defending World Series champions want to go well beyond the 162-game schedule and still have some catching up to do. So a 6-3 win over the White Sox on a rainy Tuesday night wasn't cause for a grand celebration.

"By no means have we played our best baseball," pitcher David Price said. "I think we all know that we're a better team than what we've showcased these first 81 games and we need to get better."

Price struck out nine over six innings Tuesday as the Red Sox and White Sox endured steady rain that surged into a downpour at times.

Xander Bogaerts hit a two-run homer in the fifth and Rafael Devers went 4-for-4 for Boston, which improved to 44-37 with a victory in their 81st game.

"We'll take more, obviously, but it is what we are right now," manager Alex Cora said. "For everything that went wrong in the first half, we've got 44 wins. There's not too many teams that have."

The start of the game was delayed 24 minutes because of rain, which continued to fall through the first five innings. Just after the rain temporarily let up, Chicago shortstop Tim Anderson sprained his right ankle on a fielding play.

Anderson was carried off the field on the shoulders of manager Rick Renteria and a trainer.

The White Sox said the ankle was sprained and X-rays were negative.

"It seems to be an ankle sprain, but to what degree it's still left to be determined tomorrow. We'll see how he feels," Renteria said.

Renteria said he wasn't sure if the soggy field had anything to do with the injury.

"I don't know. I would have to look at it. I do know that it just looked like his foot was planted," Renteria said. "He was making the throw off to an angle. I couldn't tell you if that had any bearing on it."

The rain's effects were apparent throughout the night, leading to funny hops skipping off the wet field and a bat flying into the stands after it slipped out of Boston catcher Christian Vazquez. A fan caught the bat and was not injured. Anderson was clearly hurt, although the White Sox would say later that X-rays were negative and Anderson was out with a sprain.

Price (5-2) worked through the conditions for six innings, holding Chicago to three runs on eight hits. Brandon Workman pitched the ninth for his third save.

José Ruiz (0-1) took the loss after allowing Bogaerts' two-run shot in the fifth, breaking a 3-all tie.

Rafael Devers was 4-for-4 with an RBI for Boston. He led off the fifth with his second double of the game and Bogaerts followed with a drive out to center.

Vázquez extended his career-high hitting streak to 11 games with a two-run single in the third, tying it at 3-all.

Eduardo Núñez drove in a run for Boston with a sacrifice fly in the sixth.

Carson Fulmer was Chicago's "opener," getting his first start of the season and pitching two innings. Fulmer allowed one unearned run on two hits and a walk, striking out three.

Players for both team had difficulties dealing with the conditions.

Vázquez lost his grip while taking a swing in the second inning and the bat twirled all the way to a fan sitting several rows behind Chicago's dugout. The bat was moving slow enough that the fan caught it and was not harmed, smiling and waiving when the fans gave him a rousing cheer.

The series is the only visit the White Sox will make to Boston this summer and postponing the game for a doubleheader Wednesday was unlikely, given the Red Sox were scheduled to fly Wednesday night to London for a pair of games this weekend against the New York Yankees.

White Sox: 2B Yolmer Sánchez was running a high fever and went back to the team hotel, Renteria said. . After Anderson was helped to the dugout, Leury Garcia moved in from center field to play short and Ryan Cordell came off the bench and took over in center.

Red Sox: RHP Heath Hembree (right elbow strain) and 1B/DH Mitch Moreland (right quadriceps strain) will not travel for this weekend's games in London, manager Alex Cora said. 1B Steve Pearce (low back strain) is also unlikely to make the trip. Cora said as much as he'd love to have a healthy roster, it's a long trip and he doesn't want risk any players by rushing their return. "We've got to be smart and that's the challenges of the whole thing," Cora said.