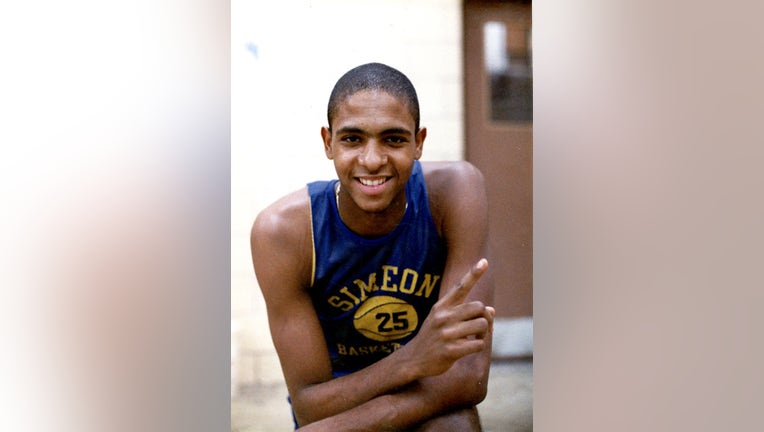 Ben Wilson was the first national No. 1 prep player from Illinois. He died Nov. 21, 1984, a day after he was shot outside Simeon. (Ed Wager, Jr./Chicago Tribune/Tribune News Service via Getty Images / Getty Images)

CHICAGO - The brothers of Chicago high school basketball star Ben Wilson, who was viewed as the top player in the nation before his murder in 1984, said Thursday they have forgiven the shooter.

Anthony Wilson said he was asked if he was crazy for meeting William Moore, the man convicted of gunning down Ben Wilson. Anthony Wilson, along with his brother Jeffrey, agreed to meet with Moore after his mother, Mary Wilson, asked the family on her deathbed in 2000 to forgive Moore.

“The right thing to do is meet with this man, get the closure that I needed to heal myself and it was one of the best moments in my life,” Anthony Wilson said.

The three men first met in 2017, but they appeared publicly together for the first time before about 350 Chicago Public School students to preview clips from an upcoming documentary, “Behind the Gun,” that chronicles the brothers’ road to forgiving Moore. Moore was 16 years old when the 17-year-old Wilson bumped into him as he was walking with his girlfriend. An argument followed, and Moore shot Wilson. Moore served 19 years and 9 months in prison before his release in 2004. An accomplice, Omar Dixon, 16, was also convicted in Wilson’s death.

At the time, Ben Wilson, a 6-foot-8 forward was being recruited by the nation’s top college basketball programs, among them DePaul, Indiana and Illinois.

Part of the reconciliation meant understanding why Moore gunned down the star of Simeon High School, which has since produced several NBA players, including Nick Anderson, Derrick Rose and Jabari Parker.

“It was just an argument that went bad. It wasn’t a robbery. Ben was feeling a certain type of way and he wasn’t backing down. I wasn’t backing down,” Billy Moore said, adding he didn’t have the emotional tools to end the argument peacefully. “I still live with the loss of Benji every day. I know that when I die and I have to stand in front of my maker, I have to account for that.”

Thursday’s discussion between the men was moderated by rapper and actor Common and former U.S. Education Secretary Arne Duncan, a childhood friend of Ben Wilson.

“To me, he was our hero before we had Michael Jordan,” Common said.

One of clips played for the students shows Jeffrey Wilson giving the bullet taken from his brother’s body to Moore as the two embraced.

Since being freed from prison, Moore has learned the pain that comes from gun violence. His son was shot to death three years ago.