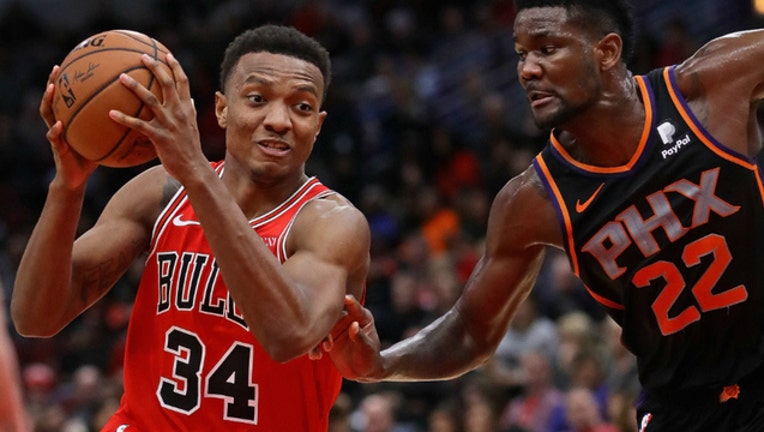 Wendell Carter Jr. #34 of the Chicago Bulls drives against Deandre Ayton #22 of the Phoenix Suns at the United Center on November 21, 2018 in Chicago, Illinois. The Bulls defeated the Suns 124-116. (Photo by Jonathan Daniel/Getty Images)

CHICAGO (AP) - The Chicago Bulls have ruled out injured rookies Wendell Carter Jr. and Chandler Hutchison for the remainder of the season, and might soon do the same with Otto Porter Jr.

Executive vice president of basketball operations John Paxson says the Bulls have "run out of time" on Carter (left thumb surgery) and Hutchison (right toe injury). He stopped short of shutting down Porter (strained right rotator cuff), though he did say, "It's kind of trending that way."

Carter and Hutchison each appeared in 44 games. The No. 7 pick, Carter averaged 10.3 points and 7 rebounds, while Hutchison averaged 5.2 points and 4.2 rebounds after getting drafted 22nd overall.

The Bulls entered Saturday's game with the fourth-worst record in the NBA. Shutting down Porter and LaVine might result in a few more losses and better odds in the lottery.

"We're gonna monitor them," Paxson said. "Otto has so many things going on that we won't push him. We may run out of time, too. For Zach, I think it's important for him to try to fight through some of these little things. Last year, we shut him down toward the end. It's a case-by-case basis. With Zach, we're gonna monitor him, too. If his patellar tendinitis doesn't get appreciably better in the next week, then you start looking at the reality of it and it doesn't make any sense (to play).