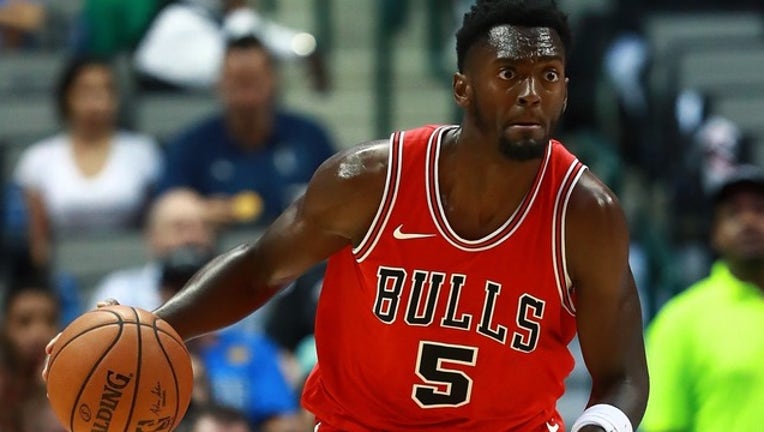 Bobby Portis of the Chicago Bulls dribbles the ball against the Dallas Mavericks at American Airlines Center on October 4, 2017 in Dallas, Texas. (Tom Pennington/Getty Images)

CHICAGO (AP) - The Chicago Bulls suspended forward Bobby Portis for the first eight games of the season Wednesday for injuring teammate Nikola Mirotic during a fight at practice.

Mirotic suffered broken bones in his face as well as a concussion on Tuesday and will likely need surgery. Vice president of basketball operations John Paxson said Mirotic is expected to miss four to six weeks, and that he needs to clear the concussion protocol before the facial injuries can be resolved.

Paxson acknowledged fault on both sides while calling the incident "inexcusable." He also called Portis "a good kid" who "made a mistake."

It certainly was not what the rebuilding Bulls wanted heading into the season opener at Toronto on Thursday night. The incident takes two more players out of their rotation, with newcomer Zach LaVine also missing the start of the season as he works his way back from a torn ACL he suffered with Minnesota.

A 2015 first-round pick out of Arkansas, Portis has averaged 6.9 points and five rebounds. He will be allowed to practice with the team while he is suspended.

Mirotic averaged 10.8 points over his first three seasons with Chicago. A restricted free agent, he signed a two-year contract that could pay as much as $27 million in September. The club holds an option on the second season.