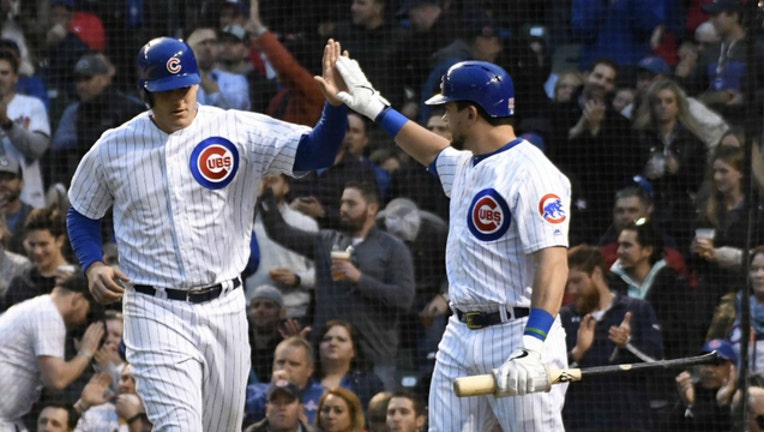 Hitting for starting pitcher Jon Lester with the bases loaded, Caratini lined the first pitch from John Gant to left field. Marcell Ozuna attempted a sliding catch, but the ball dropped and rolled to the wall, allowing three runs to score.

Kyle Schwarber followed with a double to drive in Caratini, and the Cubs won for the fifth time in six games since being swept in a three-game series at St. Louis last weekend.

Schwarber's 12th homer tied it at 4 in the fourth. Javier Báez had a triple and two RBIs as Chicago remained percentage points ahead of Milwaukee in first place in the NL Central.

Lester (5-4) was hit hard early, allowing all four St. Louis runs in the first inning on long homers by Ozuna and Harrison Bader. The 35-year-old left-hander settled down and retired the last 11 hitters he faced in five-hit, six-inning outing. It was Lester's second straight win following a three-game slump in which he was 0-3 with a 10.29 ERA.

Three Cubs relievers combined to set down the next eight St. Louis hitters in order before Kolten Wong struck out swinging, but reached on a passed ball in the ninth against Tyler Chatwood.

The Cardinals jumped ahead 4-0 in the first. With two runners on, Ozuna crushed a 3-0 pitch through a steady wind and off the metal roof of an enclosed viewing area deep in the center field batter's eye. The ball landed with a thud that could be heard throughout Wrigley Field.

Jose Martinez flew out to the wall in left, then Bader launched the first pitch he faced over the left-field bleachers and onto Waveland Avenue.

The Cubs cut it to 4-2 in the bottom of the inning. Chicago loaded the bases with none out, then picked up runs on Báez's force out and a single by Willson Contreras.

Báez tripled home Anthony Rizzo from first with none out in the third, cutting the score to 4-3.

Schwarber capped an 11-pitch at-bat by lining his 12th homer to right in the fourth to tie it 4-all.

New Cubs closer Craig Kimbrel threw a bullpen session at Wrigley Field on Saturday before leaving for the team's training facility in Mesa, Arizona. On Friday, Chicago finalized a three-year contract with the right-hander that guarantees him $43 million.

Manager Joe Maddon had no details on Kimbrel's session. The 31-year-old Kimbrel turned down a $17.9 million qualifying offer from the Red Sox in November, then sat out. Theo Epstein, the Cubs president of baseball operations, hasn't set an exact timetable for Kimbrel's return to the majors.

Cardinals: INF Jedd Gyorko was placed on the 10-day injured list with a strained lower back before Saturday's game and St. Louis purchased the contract of infielder Tommy Edman from Triple-A Memphis. The 30-year-old Gyorko said he first felt his back spasm in the third inning of Friday's 3-1 loss to the Cubs when he fielded Anthony Rizzo's grounder at third base.

Edman made his major league debut as pinch hitter in the ninth and struck out swinging.

Cubs: INF Addison Russell was held out of the starting lineup for the fourth straight game with a bruised right (throwing) hand, but delivered a pinch-hit sac fly in the seventh to make it 9-4 and remained in the game at second. Maddon said Russell was injured sliding against Colorado on Tuesday.

UP NEXT: Cardinals RHP Adam Wainwright (5-5, 4.34) faces Cubs RHP Kyle Hendricks (6-4, 3.16) in the series finale on Sunday night. Wainwright tossed eight shutout innings in a 2-1 win over the Cubs at St. Louis last Sunday when he allowed two hits, but walked a season-high seven. Hendricks has won five straight decisions over his last seven starts with a 2.09 ERA during that span.