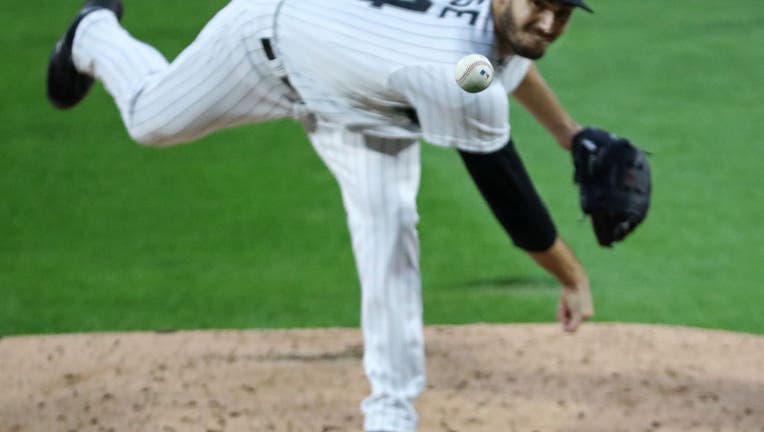 Cease walked the leadoff man four times and hit a batter, but wiggled out of trouble each time. The right-hander allowed two hits and struck out four.

The Indians went 1 for 8 with runners in scoring position and left 10 runners on base, continuing a season-long problem and wasting a terrific start by Civale. They had won three in a row.

Cleveland played without manager Terry Francona and hitting coach Ty Van Burkleo. Francona missed his sixth straight game while addressing a gastrointestinal issue he has been dealing with for months. The team announced before the series opener that Van Burkleo had opted out of the 2020 season because of the coronavirus.

Civale (1-2) allowed five hits, struck out five and walked one in seven innings.

The White Sox got their first run in the first. Luis Robert walked, advanced to third on Yoán Moncada’s single to right and scored when José Abreu bounced into a double play.

Adam Engel made it 2-0 when he connected for a solo drive on Nick Wittgren’s first pitch of the eighth. It was Engel’s homer second of the season.

After Cease (2-1) departed, Aaron Bummer and Evan Marshall combined for three innings before Alex Colomé got three outs for his fourth save.

Bummer departed after throwing a pitch to José Ramírez in the seventh. The team said he was experiencing left biceps soreness and will be re-evaluated Saturday.

The Indians loaded the bases with no outs in the second and came away with nothing. Oscar Mercado struck out swinging before Sandy León bounced into a double play.

Cease got some help from his defense in the third. James McCann cut down Delino DeShields attempting to steal second for the first out of the inning. Second baseman Danny Mendick then robbed César Hernández with a diving stop.

Cleveland loaded the bases again with two out in the fifth, but Cease got Ramírez to bounce to second on his 99th pitch. Ramírez went 0 for 4 and left six runners on base after he homered from both sides of the plate during Cleveland’s 13-0 victory over Cincinnati on Thursday night.

It was quite a turnaround from Cease’s previous start against Cleveland, when he lasted just 2 1/3 innings and was charged with four runs in a 4-3 loss to Civale and the Indians on July 28.

Indians: OF Tyler Naquin (toe fracture) has been playing in simulated games at the team’s alternate site in Lake County and is getting close to returning. He is further along than C Roberto Perez (shoulder), who last threw on Wednesday.

White Sox: C Yasmani Grandal (left foot irritation) and RF Nomar Mazara (left foot) got the day off. “Expect them both to be back going tomorrow,” manager Rick Renteria said. Mazara was hit on the left foot by a pitch during Thursday night’s 8-3 loss to Milwaukee. ... SS Tim Anderson (strained right groin) is expected to work out with the team Sunday and could be activated during next week’s three-game series at Detroit. ... DH Edwin Encarnación (inflammation near his left shoulder) took some dry swings and could go through batting practice Saturday.

Indians right-hander Zach Plesac (0-1, 1.80 ERA) makes his third start of the season Saturday. He faced Chicago on July 29 and struck out 11 in eight scoreless innings, but he got a no-decision in Cleveland’s 4-0 loss. The White Sox were waiting to see what happened in the series opener before announcing their starter for Saturday.