CHICAGO - The Chicago Bears appear to be in for some big changes once the season ends, and no one needed to remind coach Matt Nagy what that means for him.

A 29-3 romp over the New York Giants on Sunday might have been his final home game at Soldier Field. And the season finale at Minnesota could mark the end of his four-year tenure.

For now, he’s focused on the final game and trying to end a dismal season on a more positive note. The Bears (6-10) have back-to-back wins after losing eight of nine. And they hope to have quarterback Justin Fields return to the lineup when they visit the Vikings.

The rookie has missed the past two games because of an ankle injury. The Bears will have a better handle on his availability when they return to practice on Wednesday. 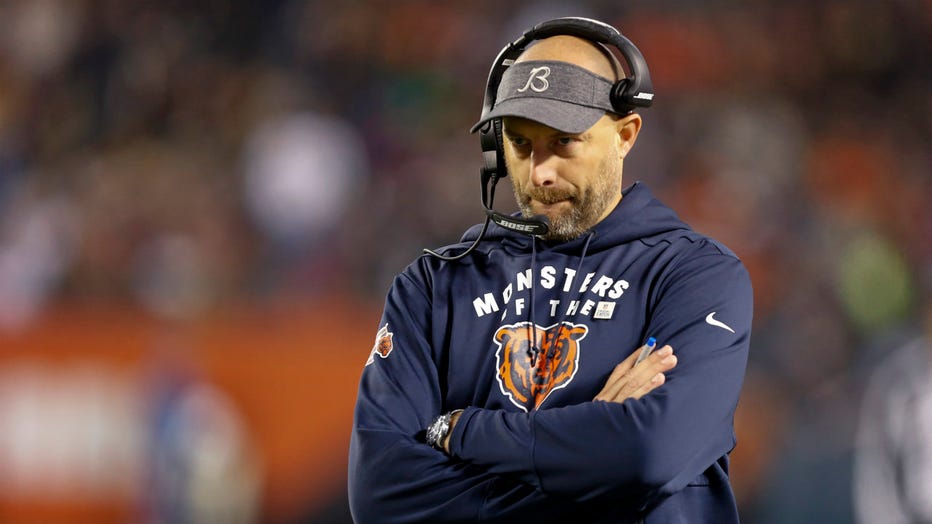 In Fields’ absence, veteran Nick Foles led Chicago to a comeback win at Seattle and Andy Dalton started against New York after being sidelined because of a groin issue.

Fields, the No. 11 overall pick, has had a choppy season. The former Ohio State star has shown promising flashes. But it remains to be seen if he will develop into a franchise quarterback.

The Bears have lost eight of the 10 games he has started, including the past seven with him in the lineup. The only wins were against struggling Detroit and Las Vegas in Weeks 4 and 5.

"He’s put a lot of time and effort into this year, into developing and becoming better as a quarterback," Nagy said. "What this will enable him to do is finish on a high note."

The defense. The Bears intercepted Mike Glennon twice, recovered two fumbles and forced a safety. They also had four sacks — including Robert Quinn’s franchise single-season record 18th and a career-high two by Trevis Gipson — for 34 yards.

The defense helped Chicago essentially seal the win in the opening minutes, with takeaways on the Giants’ first two possessions.

Gipson had a strip-sack on the game’s first play from scrimmage and Tashaun Gipson Sr. picked off Glennon on the next possession. The two takeaways led to a scoring run by David Montgomery and touchdown catch by Darnell Mooney, making it 14-0.

The offense. With 249 yards, the Bears didn’t exactly light up the Giants.

Andy Dalton’s 63.2 passer rating might have been Brady-like compared to Glennon’s 5.3. But even so, the three-time Pro Bowler was just 18 of 35 with 173 yards, a touchdown and interception in his fifth start this season.

In the comeback win at Seattle last week, with Fields and Dalton sidelined, Nick Foles threw for 250 yards and posted a 98.5 rating in one of the best performances by a Chicago quarterback this season.

Quinn. The veteran linebacker broke Dent’s record of 17 1/2 sacks in 1984 when he got to Glennon in the fourth quarter. That continued a remarkable comeback. The 31-year-old Quinn had just two sacks last season — his first in Chicago. Now, he needs just one to tie his career high of 19 with St. Louis in 2013.

WR Allen Robinson. The latest chapter in a difficult season had Robinson catching just four passes for 35 yards. To be fair, he missed the previous two games because of COVID-19 issues. And Nagy indicated after the game he might have been somewhat limited.

"He seemed good," Nagy said. "I was trying to keep an eye on him coming in and out. There were some times he probably would have been in on certain plays here or there earlier on as we get through his wind and where he’s at, but I thought he did well."

The Bears removed TE Jesper Horsted and LB Joel Iyiegbuniwe from the reserve/COVID-19 list on Monday.

800 — The win was the 800th counting the postseason for the Chicago. The Monsters of the Midway joined Green Bay as the only franchises to hit that mark.

The Bears close the season at Minnesota on Sunday.