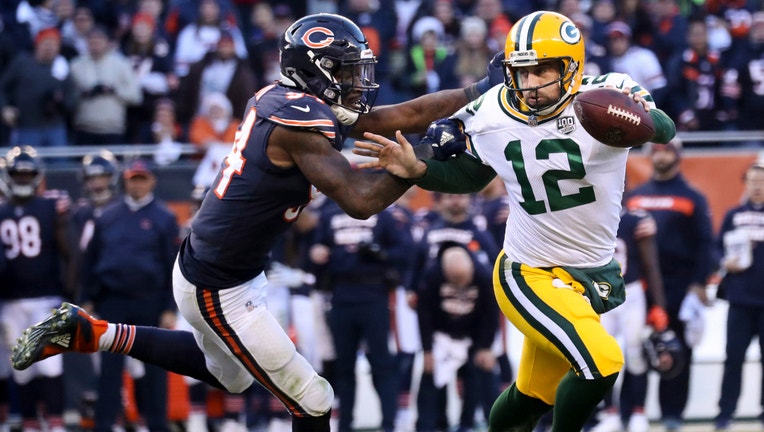 It hasn't been the same type of unit for several reasons, and Pagano's first Bears defense declined at making impact plays.

"We'll never accept where we're at," Pagano said. "It's not good enough. I'll go back and look at myself. Everybody will look at themselves and we'll make the necessary adjustments in the offseason and we've got to be better. We've got to play better."

Pagano, the former head coach of the Indianapolis Colts, took over the Chicago defense when Vic Fangio left to become head coach of the Denver Broncos. Pagano inherited the league's No. 1 team in forcing turnovers, defending the run and preventing points.

The Bears are 7-8 after winning the NFC North at 12-4 last year, when they led the league with 27 interceptions. They rank 28th this year with eight.

"We just haven't been able to force 'em," Pagano said about turnovers. "So, we'll do the same thing; we'll go out today and work on intercepting, punching the ball out, attack the football and hopefully it will come. That's all we can do."

The Bears close the season Sunday at Minnesota against the Vikings (10-5) in a game meaningless to both teams. Although the Vikings are in the playoffs, they are unable to improve or drop in their playoff seeding, while the Bears were eliminated Dec. 15 with a 21-13 loss to Green Bay.

Players say there is incentive to finish on a positive note.

If not for pride, the game means something for next season to Bears defensive players.

"Everyone knows when a team isn't going to the playoffs, everyone is being evaluated because obviously we're not good enough," cornerback Prince Amukamara said. "We know that ownership and management are looking for the right personnel, so guys know they have to give their best because they're being evaluated extremely hard these last two games.

"I think guys are going to go out and give their best."

Injuries have played a big factor in the Bears defense dropping to eighth in yardage allowed after finishing third last year. They're fifth in scoring defense after being No. 1 last year.

The biggest loss was probably defensive lineman Akiem Hicks, who hasn't practiced this week and is likely to miss the finale. He has been available for only five games due to a dislocated elbow.

"Not only his play on the field, but his leadership, his enthusiasm, his love for the game. I mean, the guy is a big, big man, and he can wreak havoc in there and he commands double teams," Pagano said. "The one game we got him back after his injury, he went in and showed up all over the stat sheet.

"It was a big loss, and I'm proud of the guys who stepped in for him. They grew. They took advantage of their opportunities, but those guys, I mean, he's a game-wrecker. He's one of the top defensive linemen in this league. So, it hurts you when you lose guys like that."

A drop in sacks accompanied the fall-off in turnovers. Mack has 8 1/2 sacks after totaling 12 1/2 last year, and outside linebacker Leonard Floyd has only three - and just one since the season opener.

Floyd was the Bears' first-round draft pick in 2016.

"Again, there's always going to be expectations with where you were picked and all this stuff, but Leonard's played really good for us," Pagano said. "He's been consistent. Does he have the sack numbers that we all wanted? No. Does Khalil have 'em? No.

"The turnovers, we haven’t produced in those areas the way we wanted to. But (Floyd) has done a heck of a job. He comes in here every single day and prepares and practices hard and plays hard every single down. The splash plays that we all love to see, we didn't see as many of them and he'd be the first one to tell you that. But down-in and down-out he does a great job. He's always sacrificing for the team."

As with the Bears offense, there will be analysis and change in the offseason.