There was no way Bears general manger Ryan Pace and head coach Matt Nagy were going to bank their futures on quarterbacks Andy Dalton or Nick Foles, FOX 32's Lou Canellis reports. They needed a franchise quarterback and Pace went swinging for the fences again, trading up nine spots with the New York Giants and picking Fields.

Fields has great talent and can make things happen with his feet. 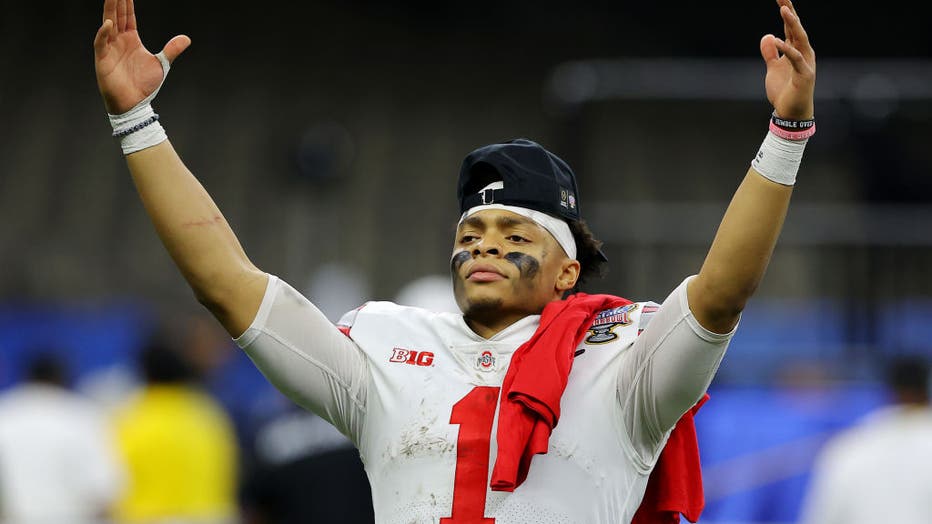 The Big Ten Offensive Player of the Year in each of his two seasons after transferring from Georgia, Fields threw for 5,373 yards, 63 touchdowns and nine interceptions for the Buckeyes.

He was a Heisman Trophy finalist in 2019, when he threw for 3,273 yards and 41 touchdowns while running for 10 more scores after being granted a waiver that allowed him to play immediately. He was MVP of the Big Ten championship that year against Wisconsin before the Buckeyes lost to Clemson in the national semifinals.

He becomes the second quarterback drafted by general manager Ryan Pace since he was hired in 2015. The Bears traded up a spot in 2017 to take Mitchell Trubisky at No. 2 over Patrick Mahomes and Deshaun Watson. Trubisky is now backing up Josh Allen in Buffalo after the Bears decided to let him go as a free agent.

The Bears took Fields after three quarterbacks went off the board, with Clemson’s Trevor Lawrence, Brigham Young’s Zach Wilson and North Dakota State’s Trey Lance going to Jacksonville, the New York Jets and San Francisco. Alabama’s Mac Jones was available but he wound up going to New England at No. 15.

"I felt like my family was more nervous than me," Fields said. "But I’ve been in so many different situations in my life where I think I want something, I think I want to do this, but God has a different plan for me."

The Bears were looking for a young quarterback after signing veteran Andy Dalton last month. And they’re banking on Fields developing in a way that Trubisky did not the past three seasons under coach Matt Nagy.

Fields said he and Nagy developed a relationship through Zoom calls and his pro day.

"Coach Nagy called me up and asked me if I was ready to be a Chicago Bear and I told him, ‘Of course,'" Fields said. "Coach Nagy is a great coach, he’s a great person."

The Bears made the playoffs for the second time in three years, though they got in as the seventh seed in an expanded field. They went 8-8 in the regular season for the second year in a row, then lost at New Orleans in a convincing wild-card loss.

Even so, chairman George McCaskey opted to stick with Pace and Nagy. But the heat was on them to get this pick right.

The Bears still could use help on the offensive line and at receiver. There are also issues on defense, particularly after letting former All-Pro cornerback Kyle Fuller go for salary cap reasons. They also could use another edge rusher opposite Khalil Mack after Robert Quinn managed just two sacks last season.

Fields is Chicago’s first opening-round pick since 2018, when they took linebacker Roquan Smith at No. 8. Smith is the Bears’ only first-round pick still on the team since Pace was hired in 2015.

They traded their 2019 and 2020 first-rounders to the Oakland Raiders for Khalil Mack prior to the 2018 season.

Receiver Kevin White (No. 7 in 2015), linebacker Leonard Floyd (No. 9, 2016) and Trubisky were either outright busts or simply did not perform the way Chicago hoped.