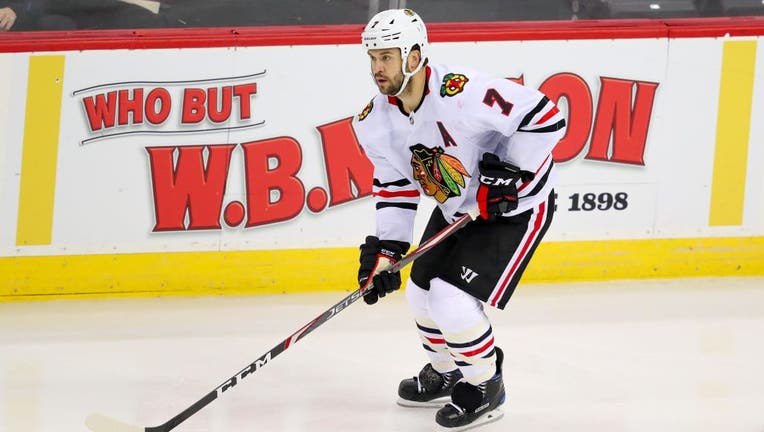 CHICAGO - Reality set in for Jonathan Toews when he got to the Chicago Blackhawks' locker room Friday morning.

Seabrook has been ruled out for the rest of the season after years of physical play finally caught up to the steady defenseman, who had right shoulder surgery on Friday. The 34-year-old Seabrook then will have surgery on his right hip in January and left hip in February.

The Blackhawks also will be without Calvin de Haan for the rest of the year. The 28-year-old defenseman had his own right shoulder surgery on Friday.

Seabrook and de Haan were placed on long-term injured reserve, creating significant salary-cap space, but leaving Chicago with a huge void on the back end.

“From the (coaching) perspective, we're focused on the players we have and find a way to get it done,” coach Jeremy Colliton said. “But of course those guys are really big parts of the group, both on and off the ice. A lot of leadership and solid, dependable-type players, which, of course, we're going to miss."

De Haan was acquired in a June trade with Carolina. He had surgery on the same shoulder last offseason.

Colliton said both defensemen are expected to be ready for training camp next year. But in the meantime, a run of injuries is making it more difficult for last-place Chicago to work its way into the the playoff race.

Brandon Saad is expected to miss another three weeks after he hurt his right ankle during Chicago's 4-1 victory at Winnipeg on Dec. 19. Fellow forwards Andrew Shaw and Drake Caggiula are on LTIR due to concussions, though Caggiula has been skating and could return soon. Rookie defenseman Adam Boqvist will miss Friday night's game against the New York Islanders because of a right shoulder injury.

“I don't manage expectations,” Colliton said. “We expect to win. We expect to compete, give ourselves a chance with how to we play.”

“Such a huge part of our room,” forward Patrick Kane said. “So hopefully he gets his injuries fixed and comes back better than ever.”

Seabrook was a healthy scratch for the third time this season when Chicago lost 4-1 to Colorado on Dec. 18. The Blackhawks then announced the next day he was undergoing further medical evaluation.

Seabrook, who is under contract through the 2023-24 season at an average annual value of $6,875,000, missed a total of nine games over the previous six seasons.

“He's battled through these injuries for a long time,” defenseman Duncan Keith said. “Anybody else, they probably would have been missing a lot more time than that over the course of the last several seasons. It shows the kind of mentality and the type of person that he is.”

Keith and Seabrook have been connected since they entered the league together. Keith, a two-time Norris Trophy winner as the league's best defenseman, said he has played his best hockey alongside his longtime pal.

“We sit beside each other in every locker room,” Keith said, “so it's different, you know, not having him on the bus and things like that. He's definitely missed, but like I just said, nothing we can do about it now.”