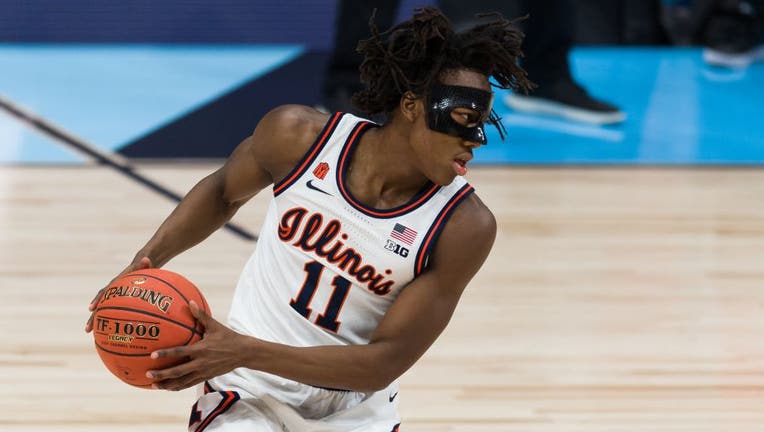 CHICAGO - Ayo Dosunmu was sure of one thing. No way were there 37 players better than him in this draft.

If he’s entering the NBA with a bit of chip on his shoulder, the Illinois star guard can take some comfort knowing he will be playing for his hometown team.

The Chicago Bulls drafted Dosunmu with the No. 38 overall pick on Thursday, adding an aggressive backcourt scorer who helped the Illini emerge as one of the nation’s best teams.

"This is like an unreal feeling," he said. "I can’t really explain how I’m feeling right now. I’ve just got to let it die down. I grew up watching Chicago every day, every game."

A Chicago product who played at Morgan Park High, Dosunmu averaged 20.1 points, 6.3 rebounds, and 5.3 assists as a junior and helped lead Illinois to the Big Ten Tournament championship last season. The top-seeded Illini lost to Loyola Chicago in the second round of the NCAA Tournament as a struggling Dosunmu finished with nine points and six turnovers.

But in his mind, he was a first-round talent, with the scoring and playmaking skills that will translate to the next level. Bulls executive vice president of basketball operations Arturas Karnisovas hopes that’s what happens.

"I think he has high expectations of himself," Karnisovas said. "I spoke to him after we drafted him. He was real excited with his family around. He’s just looking forward to getting into the gym."

Karnisovas said Dosunmu is "more seasoned" because he played three years in college. "He’s done a lot during his career in college, so now it’s the next step for him."

The Bulls traded their first-round pick to Orlando as part of the midseason deal for Nikola Vucevic, assuming the two-time All-Star center would help them make a playoff run last year. It didn’t work out that way.

The Magic wound up with the No. 8 pick when Chicago landed outside the top four in the lottery and took Michigan swingman Franz Wagner.

The Bulls finished 11th in the Eastern Conference at 31-41, two games behind Charlotte for the final play-in spot and out of the postseason for the fourth straight year. They think they are on the right track after their first year with Karnisovas leading the basketball operation and Billy Donovan coaching them.

Led by U.S. Olympian Zach LaVine and Vucevic, the Bulls believe they have the makings of a core that can propel them in the East. But they also have plenty of work to do to make it happen and no shortage of big decisions along the way.

They have a deadline Saturday to extend a one-year, $9 million qualifying offer to Lauri Markkanen. That would make him a restricted free agent and allow the Bulls to match an offer he receives or find a trade partner.

The 7-footer from Finland shot a career-high 48% overall and 40.2% on 3-pointers. But he also lost his starting job in another injury-filled season and averaged career lows in points (13.6) and rebounds (5.3).

Veterans Thaddeus Young and Tomas Satoransky have partially guaranteed contracts. The Bulls could part with them to create more cap space.