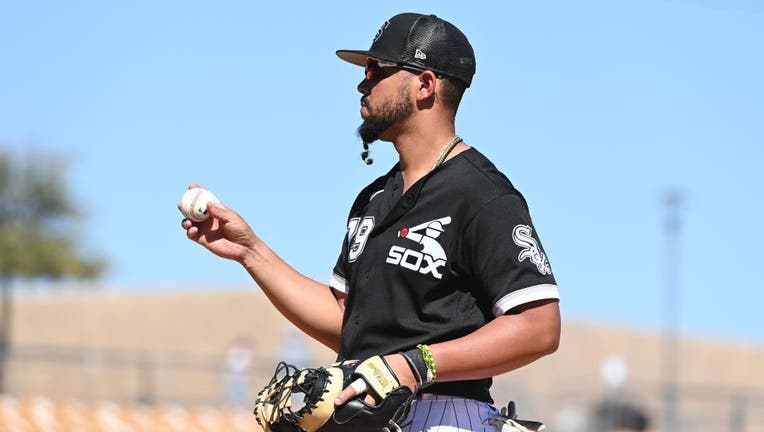 Jose Abreu #79 of the Chicago White Sox gets ready to throw the ball against the San Francisco Giants during a spring training game at Camelback Ranch on March 24, 2022 in Glendale, Arizona. (Photo by Norm Hall/Getty Images)

CHICAGO - The Chicago White Sox ran away with the AL Central and made the playoffs for the second year in a row, a first for the franchise.

They're looking for more after a pair of early exits.

"You see the talent, you see the group of guys in here and on paper, we have a pretty good team. Whether that translates into wins, we'll figure that out in April," star closer Liam Hendriks said. "But as a group, I feel like we've got the mentality that's going to be able to move this forward."

With Hall of Fame manager Tony La Russa back for a second tenure and stars like Tim Anderson and Jose Abreu and Lucas Giolito and Lance Lynn leading the rotation, the White Sox went 93-69 last season. They finished 13 games ahead of Cleveland in winning their first division championship since 2008. But in the playoffs, they bowed out early again.

Chicago lost to Houston in four games in the division series after getting knocked out by Oakland in the wild-card series in 2020. After a quiet offseason, the White Sox return with largely the same roster while other teams made some big moves.

"We understand that everybody is making their team better and that nothing is given," Anderson said. "Let's see what happens."

The White Sox open the season April 8 at Detroit.

One notable change is in the rotation.

Oft-injured Carlos Rodon signed with San Francisco following his first All-Star selection, clearing the way for Michael Kopech to move from the bullpen to a starting role. Kopech missed the 2019 season following Tommy John surgery and opted out in 2020.

The White Sox are reaping the rewards after developing a long line of stars through their minor league system in recent years, including Anderson and Giolito.

They also have slugging Cuban outfielders Yoelqui Cespedes and Oscar Colas in their system. But rookies don't figure to play major roles, at least for now, on a team with plenty of young stars in the majors.

Reliever Craig Kimbrel could be a candidate to be traded after struggling in a setup role after being acquired from the crosstown Cubs prior to the deadline.

Kimbrel had a 5.09 ERA and one save in four chances with the White Sox, a big drop for someone who rediscovered the form that made him one of the game's best closers. He converted 23 of 25 saves and had a 0.49 ERA with the Cubs while making his eighth All-Star team.

Dallas Keuchel is eager to rebound from a difficult season. The two-time All-Star and former Cy Young Award winner saw his ERA leap to 5.28 from 1.99 in the pandemic-shortened 2020 season, his first in Chicago. He was 9-9 in 32 appearances and 30 starts after going 6-2 in 11 outings the previous year.

After hitting some bumps early last year, one question is whether it will be a smoother ride for La Russa in the second season of his second tenure with the club.

The Hall of Famer was unaware of a rule that would have allowed him to use Jose Abreu as the automatic runner at second base rather than closer Liam Hendriks in the 10th inning of a loss to Cincinnati.

He also criticized rookie Yermin Mercedes for homering on a 3-0 pitch despite a take sign in the ninth inning of a lopsided win over Minnesota. Mercedes went into a tailspin following a scorching start and was sent to the minors.

But La Russa also passed John McGraw for second among managers in wins. And when the season was over, Anderson insisted he wanted him to return.