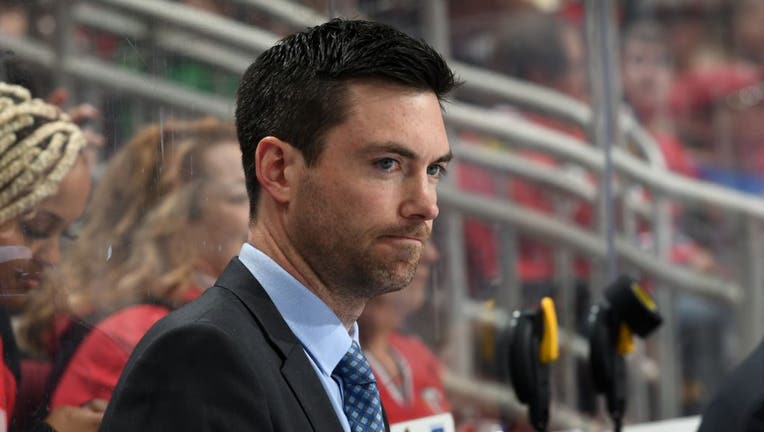 CHICAGO - Jeremy Colliton replaced a beloved figure with the Chicago Blackhawks. Then his first full season with the team was interrupted by a pandemic.

That’s a lot of adversity for a first-time NHL coach, but Colliton thinks it made him better at his job. He is looking forward to putting everything he learned to good use.

Colliton agreed to a two-year contract extension Tuesday, receiving a vote of confidence from President of Hockey Operations Stan Bowman on the eve of his third season behind the bench.

"I’ve had a chance to know Jeremy for a couple of years now and, you know, really solidified that connection that we’ve had," Bowman said. "And the way that we see the game, the direction that we’re heading and what we want to focus on in the coming years. I think he’s a great candidate to move that forward."

Colliton took over after Joel Quenneville was fired in November 2018, becoming the 38th coach in franchise history. Quenneville led the team to three Stanley Cup titles, and Colliton stepped into a room full of players who had grown accustomed to the system and mannerisms of the former NHL defenseman.

It was a rough transition. The Blackhawks dropped 14 of his first 17 games in charge. But they started to play better at the end of his first year and then took advantage of the NHL’s expanded postseason last year, winning a four-game series against Edmonton before being eliminated by Vegas.

"I think Jeremy’s been great to me and I think the whole team since the day he came in here," forward Alex DeBrincat said. "He is really hands-on, likes to talk a lot. Gives feedback, tells you pretty much exactly what he wants from you. So I think the communication there is great and it’s obviously helped me a lot and I think, moving forward, it can even help more."

Colliton was coaching Rockford in the American Hockey League when he got the job with Chicago. He also coached in Sweden before taking over the IceHogs.

In all of his coaching stops, Colliton said it takes some time before he returns to trusting his ability. Colliton, who played in 57 games with the New York Islanders, has a 62-58-17 record with the Blackhawks, and his extension runs through the 2022-23 season.

"I think you’re only human to have some self-doubt and you second-guess things and is this the right thing?" he said. "And what I always come back to is when I start to trust myself a little more, and that seems to be the right direction. Just trust your gut. Trust your instincts."

Colliton faces another tough test this year after Bowman put an increased emphasis on developing the team’s young players heading into the pandemic-shortened season. It is Bowman’s version of a rebuild for a team that still has Patrick Kane and a group of proud, accomplished veterans.

It’s up to Colliton to continue the development of the team’s younger players while keeping the veterans engaged — even if the losses pile up.

"I’m excited about working with young players, no question, but I mean, I love vets, too," he said. "You need them. It’s hard to win with a bunch of young guys. So, as a player, we always looked up to the guys who’d been in the league 10, 12 years and just the wisdom that they can bring and, you know, they work with the coach to help run the team. And so that’s an important part of what I do."

The Blackhawks will be without a couple key veterans when they open this season on Colliton’s 36th birthday on Wednesday at Stanley Cup champion Tampa Bay.

Forward Carl Soderberg is in quarantine after his arrival was delayed by a U.S. visa issue. He could play in the team’s home opener on Jan. 22 against Detroit. The team has been quiet when it comes to the status of defenseman Brent Seabrook, but Bowman said he hasn’t skated yet and will need a couple weeks for conditioning once he returns to the ice.

Forward Alex Nylander (left knee) was placed on long-term injured reserve Tuesday night, and veteran forward Zack Smith (back) was put on IR. The 32-year-old Smith was placed on waivers during training camp.